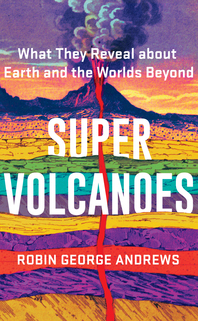 The ongoing eruption on La Palma has raised concerns over cancelled holidays and a potential tsunami.

In The Observer volcanologist Robin George Andrews weighs up the risks.

An exhilarating, time-travelling journey to the solar system’s strangest and most awe-inspiring volcanoes.

Volcanoes are capable of acts of pyrotechnical prowess verging on magic: they spout black magma more fluid than water, create shimmering cities of glass at the bottom of the ocean and frozen lakes of lava on the moon and can even tip entire planets over. Despite their reputation for destruction, volcanoes are inseparable from the creation of our planet.

Super Volcanoes revels in the incomparable power of volcanic eruptions past and present, Earth-bound and otherwise, it explores how these eruptions reveal secrets about the worlds to which they belong. Science journalist and volcanologist Robin George Andrews describes the stunning ways in which volcanoes can sculpt the sea, land and sky, and even influence the machinery that makes or breaks the existence of life. Travelling from Hawaii, Tanzania, Yellowstone and the ocean floor to the moon, Venus and Mars, Andrews explores cutting-edge discoveries and lingering scientific mysteries surrounding these phenomenal forces of nature.

"Super Volcanoes sculpt the sea, land and sky, and alter the machinery of life. Join science writer Robin George Andrews on a journey from Yellowstone, Tanzania and the ocean floor on Earth to the moon, Venus and Mars. " — New Scientist

"“In Super Volcanoes, Robin George Andrews takes readers on a Cook’s tour of volcanoes near and far, fuelling a broader curiosity about our planet and its place in the solar system... Andrews’s descriptions are breezy, readily engaging the reader… He is at his best when discussing those who live in the shadow of volcanoes and, especially, the scientists who study them.”" — Andrew H. Knoll, Times Literary Supplement