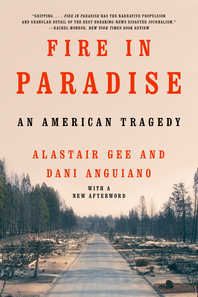 Excerpt in The Guardian

How Paradise Went Up In Flames

The harrowing story of the most destructive American wildfire in a century.

On November 8, 2018, the ferocious Camp Fire laid waste to almost the entire town of Paradise, California, a community of 27,000 people. At least 85 died, images of the fire transfixed viewers across the world and the resulting devastation yielded a humanitarian crisis that continues to unfold.

Written by a pair of Bay Area reporters who covered the story and its aftermath extensively, Fire in Paradise is a fast-paced narrative of the disaster based on hundreds of in-depth interviews with residents, firefighters, police and scientific experts. Alastair Gee and Dani Anguiano capture an historic event; explore the reasons behind the increasing frequency and force of wildfires in our time and describe the moving efforts to raise Paradise from the ruins.

"[Alastair Gee and Dani Anguiano's] account, based on interviews with residents, firefighters and academics, is horrendous, especially the section ‘Hell’, describing the fire minute by searing minute. It confirms how humans, not nature, are responsible for disasters..." — Andrew Robinson: Five of the Week's Best Science Picks, Nature