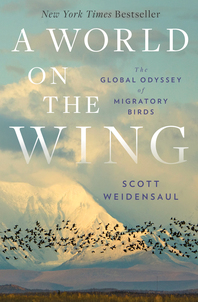 An exhilarating exploration of the science and wonder of global bird migration.

In the past two decades, our understanding of the navigational and physiological feats that enable birds to cross immense oceans, fly above the highest mountains, or remain in unbroken flight for months at a stretch has exploded. What we’ve learned of these key migrations—how billions of birds circumnavigate the globe, flying tens of thousands of miles between hemispheres on an annual basis—is nothing short of extraordinary.

Bird migration entails almost unfathomable endurance, like a sparrow-sized sandpiper that will fly nonstop from Canada to Venezuela—the equivalent of running 126 consecutive marathons without food, water, or rest—avoiding dehydration by "drinking" moisture from its own muscles and organs, while orienting itself using the earth’s magnetic field through a form of quantum entanglement that made Einstein queasy. Crossing the Pacific Ocean in nine days of nonstop flight, as some birds do, leaves little time for sleep, but migrants can put half their brains to sleep for a few seconds at a time, alternating sides—and their reaction time actually improves.

These and other revelations convey both the wonder of bird migration and its global sweep, from the mudflats of the Yellow Sea in China to the remote mountains of northeastern India to the dusty hills of southern Cyprus. This breathtaking work of nature writing from Pulitzer Prize finalist Scott Weidensaul also introduces readers to those scientists, researchers, and bird lovers trying to preserve global migratory patterns in the face of climate change and other environmental challenges.

Drawing on his own extensive fieldwork, in A World on the Wing Weidensaul unveils with dazzling prose the miracle of nature taking place over our heads.

"[A] gripping journey alongside the world’s feathered wanderers and the people who study them.... Brims with spectacle.... As the birds flit through these pages, but with ever less frequency through our lives, we can only hope that birders and non-birders alike take inspiration and a call to action from A World on the Wing. This is the kind of book we’ve been waiting for." — Christian Cooper, New York Times

"A World on the Wing is a paean to the beauty of data, viewed in masses, and to citizen science taking ornithology by storm.... Mr. Weidensaul offers the astonishment of birds’ travels, deep concern for their populations and hope for their future in well-measured, beautifully realized doses." — Julie Zickefoose, Wall Street Journal

"I’m not a birder, but Weidensaul persuades me that I could be, and that a greater appreciation of the movement and behaviour of migratory birds might bring me into closer contact with what it means to be a living thing on Earth.... [Weidensaul is] a master storyteller.... What emerges is an emphatic statement of confidence in nature’s resilience—a vision of nature as a force that we and our science are irrefutably a part of." — Ashish Ghadiali, The Guardian

"In vivid prose that conjures up the rich spell of each landscape, Scott Weidensaul takes us on exhilarating expeditions that crisscross the globe and travel deep into the heart of nature. For lifelong experts and backyard birders alike, he’s a superb guide to the winged marvels that share our planet and our lives." — Diane Ackerman, author of The Zookeeper’s Wife

"Scott Weidensaul, one of our finest nature writers, has produced another instant classic. In A World on the Wing he takes a pair of highly complex subjects—global patterns of bird migration, and the research into those patterns—and brings them to life with his own amazing adventures around the world. Here is proof that a book of solid science can also be a page-turner. Highly recommended for anyone curious about the natural world." — Kenn Kaufman, author of the Kaufman Field Guides

"Weidensaul’s dispatches are fascinating. Chapter by chapter, my jaw dropped and my eyes widened. The science of bird migration has reached a golden age, and we’re lucky to have such a graceful guide. This book is instantly among my all-time favorites, and one I’ll keep to reread." — Noah Strycker, author of Birding Without Borders

"The miracle of birds meets the miracle of technology in Scott Weidensaul’s wondrous new book, A World on the Wing. While there are huge gaps in our knowledge of migration and there is despair in our race to save species, advances in technology from microscopic transmitters to agile drones are changing the equation and making the future look hopeful. This is a book you won’t want to put down." — Jane Alexander, actress, writer and wildlife conservationist

"Weidensaul addresses migratory birds’ changing reality and the scientists who work tirelessly to learn more about them and advocate on their behalf.... The plight and toughness of both birds and their human defenders will move you in lasting ways." — BookPage, starred review

"Weidensaul is a peerless guide, sharing his intoxicating passion and decadeslong experience with countless bird species all over the world.... Another winner from Weidensaul that belongs in every birder’s library." — Kirkus, starred review

"Many mysteries of bird life and migration are revealed in this compelling and illuminating in-the-field narrative complete with maps and photographs." — Booklist, starred review