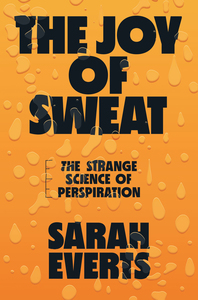 In celebration of perspiration

The amazing science behind sweat could reduce our feelings of shame, says Sarah Everts in the i newspaper

Pores for thought: how sweat reveals our every secret, from what we’ve eaten to whether we’re on drugs by Sarah Everts

The Science of Sweating It Out by Sarah Everts

24 Books to Read this Summer

A taboo-busting romp through the shame, stink and strange science of sweating.

Sweating may be one of our weirdest biological functions, but it’s also one of our most vital and least understood. In The Joy of Sweat, Sarah Everts delves into its role in the body—and in human history.

Why is sweat salty? Why do we sweat when stressed? Why do some people produce colourful sweat? And should you worry about Big Brother tracking the hundreds of molecules that leak out in your sweat—not just the stinky ones or alleged pheromones—but the ones that reveal secrets about your health and vices?

Everts’s entertaining investigation takes readers around the world—from Moscow, where she participates in a dating event in which people sniff sweat in search of love, to New Jersey, where companies hire trained armpit sniffers to assess the efficacy of their anti-sweat products. In Finland, Everts explores the delights of the legendary smoke sauna and the purported health benefits of good sweat, while in the Netherlands she slips into the sauna theatre scene, replete with costumes, special effects and towel dancing.

Along the way, Everts traces humanity’s long quest to control sweat, culminating in the multibillion-dollar industry for deodorants and antiperspirants. And she shows that while sweating can be annoying, our sophisticated temperature control strategy is one of humanity’s most powerful biological traits.

Deeply researched and written with great zest, The Joy of Sweat is a fresh take on a gross but engrossing fact of human life.

The New York Times Most Anticipated Book of the Summer

"Love stinks! As do our immune systems, parenthood, and a host of other human functions. In this exuberant romp, a science journalist ponders the myths and marvels of perspiration, sniffing out why these glands are essential to our species. Everts employs original research and encounters with clinicians on the cutting edge, among them a Ph.D. who reverse-engineered his own odors. A glowing, revelatory account that belongs on the same shelf with works by Ed Yong and Carl Zimmer." — 18 of the Best Books to Pick Up This July, Oprah Daily

"[The Joy of Sweat is] an entertaining and illuminating guide to the necessity and virtues of perspiration... Everts is a crisp and lively writer." — Jennifer Szalai, The New York Times Book Review

"Everts’ book oozes with diverse information about sweat. Some of it busts unhelpful myth... But the ballast of The Joy of Sweat is Everts’ accounts of new biotechnologies that exploit perspiration." — Peter Carty, the i newspaper, i newspaper

"Most animals do not sweat to regulate their body temperature. Some evolutionary biologists even argue that perspiration helped humans to dominance, notes science journalist Sarah Everts in her well-researched, zesty study." — Andrew Robinson reviews five of the week’s best science picks, Nature