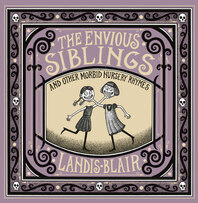 Eight gleefully macabre vignettes by an award- winning comics artist, as delightful as they are deadly.

Inspired by the dark imagination of Edward Gorey, Envious Siblings is a twisted and hauntingly funny debut. Comics artist Landis Blair interweaves absurdist horror and humour into brief, rhyming vignettes at once transgressive and hilarious. In Blair’s surreal universe, a lost child watches as bewhiskered monsters gobble up her fellow train passengers; a band of children merrily play a gut-churning game with playground toys; and two sisters, grinning madly, tear each other apart. These charmingly perverse creations take ordinary settings—a living room, a subway car, a playground—and spin them in a nightmarish direction.

“Landis Blair’s work is a fusion of Grand Guignol horror and delicately layered poignancy that can’t be found elsewhere. He is a singular morbid talent.” — Caitlin Doughty

“The Envious Siblings is a devilishly funny debut from Blair. His vigorous flair for the horrific unknown ripples throughout the comic in a tense, subdued manner. What radiates out of the comic most is Blair’s Gothic-tinged sense of wit, which easily comes through from both the rhymes and the art.” — Starburst

“The line drawings are... dark and ghoulish and mischievous and will no doubt enthral adults and maybe even some children.” — The Art Newspaper

“The Envious Siblings won’t be to every young person’s taste, but those of a darker bent may find it grotesquely appealing, like a jack-o’-lantern that’s just started to rot.” — Children's Books 2019, Financial Times