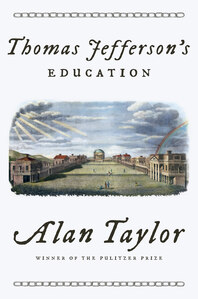 From the Pulitzer Prize-winning historian, a brilliant, absorbing study of Jefferson and his campaign to save Virginia through education.

By turns entertaining and tragic, this beautifully crafted history reveals the origins of a great university in the dilemmas of Virginia slavery. Thomas Jefferson shares centre stage with his family and fellow planters, all dependent on the labour of enslaved black families. With a declining Virginia yielding to commercially vibrant northern states, in 1819 Jefferson proposed to build a university to educate and improve the sons of the planter elite. He hoped they might one day lead a revitalised Virginia free of slavery—and free of the former slaves.

Jefferson’s campaign was a contest for the future of a state and the larger nation. Although he prevails, Jefferson’s vision of reform through education is hobbled by the actions of genteel students with a defiant sense of honour derived from owning slaves. It is the women of this hypermasculine society who redeem the best elements of his legacy.