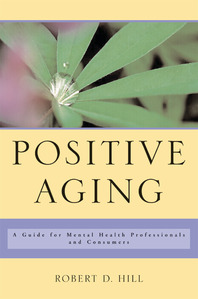 Human aging has been transformed in the 21st century.

Retirement, senility, disability, and death were all notions previously associated with growing old.

Today, with the average life span of men and women in the United States exceeding 76 years, the words successful, optimal, and positive dominate the lexicon of scientists and, increasingly, the general public. We not only plan to live longer, but expect to enjoy a superior standard of physical and emotional health for longer than any previous generation. Leading an active and purposeful life no longer stops at the outdated 65-year mark of retirement, but continues well into what was once termed "old age." With these changing attitudes comes the need for new conceptualizations of what it means to grow old.

In a groundbreaking book, Robert Hill, a psychologist, professor, and leading researcher in geriatric care, rethinks the traditional ideas we have of aging by offering us a new framework from which to understand the nature of growing old. Positive Aging offers a more innovative model of old age that focuses on achieving and fostering a positive mindset. In doing so, Hill not only explores the social and psychological trends of aging in the 21st century, but offers an illuminating examination of how advances in the science of gerontology influence the phenomenology of growing old.

Written for all those concerned about their own course of aging as well as the practitioner who provides mental health services to older adults, Positive Aging begins with a review of the term "aging" itself, its history and its changing meaning. Hill then delves into the many lifestyle choices we can make to improve our happiness as we grow older. Traditional theories of adult development and how Positive Aging plays into them are examined; successful, normal, impaired, and diseased trajectories of age-related decline are defined and explored; and useful strategies are provided for coping with common old-age issues—including cognitive deficits, depression, anxiety, and psychological barriers to happiness. Hill also covers important late-life concerns such as the role Positive Aging plays in physical disability, caregiving, grief, bereavement, death, and spirituality and meaning-based counseling. Along the way, poignant case studies help elucidate and contextualize the arguments, and keep the discussion rooted in very tangible, human terms.

Ushering in an era of new understanding of what it means to grow older, Positive Aging is an enlightening guidebook for consumers navigating such uncertain, and often worrisome terrain, as well as an invaluable resource for clinicians working with this growing population. By combining a novel approach to human aging in the contemporary world with specific suggestions and ideas to optimize that process, this book promises to help all of us cope with the vicissitudes of growing older to continue to get the most out of living.