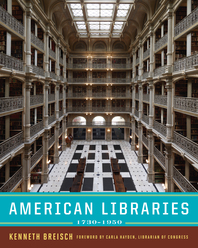 An expansive overview of our storehouses of knowledge, from the earliest library building (Philadelphia, 1745) to midcentury modern and beyond.

Although new technologies appear poised to alter it, the library remains a powerful site for discovery, and its form is still determined by the geometry of the book and the architectural spaces devised to store and display it. American Libraries provides a history and panorama of these much-loved structures, inside and out, encompassing the small personal collection, the vast university library, and everything in between.

Through 500 photographs and plans selected from the encyclopedic collections of the Library of Congress, Kenneth Breisch traces the development of libraries in the United States, from roots in such iconic examples as the British Library and Paris’s Bibliotheque-Ste.-Genevieve to institutions imbued with their own American mythology. Starting with the private collections of wealthy merchants and landowners during the eighteenth century, the book looks at the Library of Congress, large and small public libraries, and the Carnegie libraries, and it ends with a glimpse of modern masterworks.

“[A]n impressively informative history of the evolution of the library in America. . . . [S]imply stated, no community, college, or university library should be without a copy.” — Midwest Book Review

“Librarians will be gratified to read Breisch’s discussion of the ways in which librarians became critics of library planning, pushing for designs that were more practical […] American Libraries has a wider focus than many other books on this subject, which focus on only one type of library […] This allows Breisch to integrate different types of libraries and provide a wider overview of the history of libraries as a whole.” — Libraries: Culture, History & Society