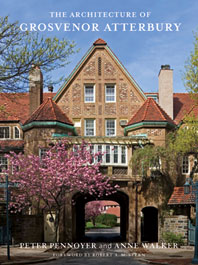 The first close look at an innovative architect and inventor who held that traditional styles could be successfully adapted for modern times.

In the final decade of the nineteenth century and the early twentieth century, the United States experienced exponential growth and a flourishing economy, and with it, a building boom. Grosvenor Atterbury (1869–1956) produced more than one hundred major projects, including an array of grand mansions, picturesque estates, informal summer cottages, and farm groups. However, it was his role as town planner and civic leader and his work to create model tenements, hospitals, workers’ housing, and town plans for which he is most celebrated. His Forest Hills Gardens, designed in association with the Olmsted Brothers, is lauded as one of the most highly significant community planning projects of its time.

As an inventor, Atterbury was responsible for one of the country’s first low-cost, prefabricated concrete construction systems, introducing beauty and inexpensive good design into the lives of the working classes. The Architecture of Grosvenor Atterbury is the first book to showcase the rich and varied repertoire of this prolific architect whose career spanned six decades and whose work affected the course of American architecture, planning, and construction. Illustrated with Jonathan Wallen’s stunning color photographs and over 250 historic drawings, plans, and photographs, it also includes a catalogue raisonné and an employee roster. It is the definitive source on an architect who made an indelible imprint on the American landscape.

“Peter Pennoyer and Anne Walker, the authors of erudite, luxuriously illustrated monographs about lesser-known architects, have now published The Architecture of Grosvenor Atterbury....In this book, both the romance and the science of the man come through.” — Christopher Gray, The New York Times

“The Architecture of Grosvernor Atterbury reveals the secrets behind some of the most beautiful houses, clubs, and buildings in America, and then accelerates into fascinating stories of his seminal role in town planning and public housing. This is not only a brilliant book of architecture but also a inspirational story of human possibilities.” — Philip K. Howard, chairman, Municipal Art Society

“With this insightful and scholarly study, Grosvenor Atterbury’s multifaceted genius is put in a larger context and made whole. From Forest Hill Gardens—one of the unsung masterpieces of American architecture, town planning, and technology—to his work as an institutional architect and museum maker, Atterbury emerges as a figure of prodigious talent.” — Barry Bergdoll, The Philip Johnson Chief Curator of Architecture and Design, Museum of Modern Art

“[D]eserves a place in any serious architectural library collection….beautiful and substantive….Pennoyer and Walker have rendered an open-eyed consideration of the architect and his vast oeuvre of projects, while broadening the canon of American architectural history.” — Amanda C. R. Clark, Adjunct Librarian, SFCC Library, ARLIS/NA

“If in his own day a mastery of historical styles was unremarkable for an architect, Atterbury’s grasp of building typologies was far from common. But what really set him apart was his sensitivity to the needs of all classes, from Rockefellers to working stiffs. Had he concentrated on the rich, as so many of his still-celebrated colleagues did, his reputation might not have lapsed into the obscurity from which Peter Pennoyer and Anne Walker have rescued him.” — R. Louis Bofferding, design critic

“Peter Pennoyer and Anne Walker evoke an age when successful architects had to demonstrate expertise in a wide variety of styles. In the process, they give to a long-overlooked master the recognition he so richly deserves—and that’s good news for everyone who cares about America’s heritage of great buildings.” — Richard Moe, president, National Trust for Historic Preservation

“Peter Pennoyer and Anne Walker who have published pioneering monographs on Delano and Aldrich (2003) and Warren and Wetmore (2006)…now turn their attention to Grosvenor Atterbury….Walker and Pennoyer have written a book as elegant and tasteful as their subject….terrifically illustrated.” — Michael J. Lewis, The New Criterion

“[T]he definitive source on an architect who made an indelible imprint on the American landscape….seminal work….well-written and extensively referenced prose accompanies the photographs and drawings.” — Queens Gazette

Also By: Robert A. M. Stern