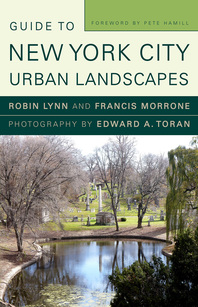 The thirty-eight urban gems covered here range from newly created linear spaces along the water’s edge, such as Brooklyn Bridge Park and the East River Waterfront Esplanade, to revitalized squares and circles, such as those at Gansevoort Plaza in the Meatpacking District and Columbus Circle, to repurposed open spaces like the freight tracks, now the High Line, and Concrete Plant Park in the Bronx. Readers can discover midtown atriums, mingle with the crowds in Union Square, travel offshore to nearby Governors Island, and enjoy the vistas of historic Green-Wood Cemetery. Pete Hamill writes in his foreword, “I’ve . . . made a list of new places I must visit while there is time. With any luck at all, I’ll see all of them. I hope you, the reader, can find the time too.” Concise descriptions, helpful maps, and vivid photographs capture the New York urban scene.

“[R]eveals a plethora of diverse urban places that many, even the most knowledgeable New York, may not fully appreciate–or even know about. . . . Combining descriptive and at times evocative word pictures, necessary facts and figures, and stunning visual images, Guide to New York City Urban Landscapes is a most useful resource for all who live in New York, spend any time there, or are students of the role of urban landscape in making our places appealing and habitable.” — New York Journal of Books

“Morrone has written 10 books on the architectural history of the city, and Lynn has organized a number of walking tours for the Municipal Art Society. But with “Guide to New York City Urban Landscapes,” they’ve outdone themselves. . . . [A] book that’s arrived at precisely the moment of landscape architecture’s newest ascent. . . . [A] definitive guide . . . . They cover it all. . . . [N]ot just a book for the moment, but for the future, too.” — Architects + Artisans

“This is the perfect book to consult before your relatives come to town and expect an insider’s tour of the city or before you pass by an unknown bit of green in the city. Many of the urban landscapes described in the guide are likely known only by nearby residents or only by the most keen city observers. . . . [C]oncise and beautifully illustrated . . .” — The Architect's Newspaper Blog

“The city offers prospects as beautiful and sublime as any in nature, as Robin Lynn and Francis Morrone amply demonstrate in their ‘Guide to New York City Urban Landscapes’ (Norton, $29.95), a helpful and insightful pathfinder to 38 inviting sites.” — New York Times

“[L]ovely color photos throughout . . . . [B]lend of history and travelogue perfect for any visiting New York City who want a guide to urban and natural landscapes that make up the City’s buildings and natural areas.” — Midwest Book Review

Also By: Edward A. Toran