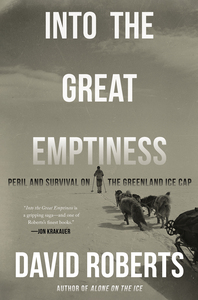 The riveting story of one of the greatest but least-known sagas in the history of exploration from David Roberts, the “dean of adventure writing”

By 1930, no place in the world was less well explored than Greenland. The native Inuit had occupied the relatively accessible west coast for centuries. The east coast, however, was another story. In August 1930, Henry George Watkins (nicknamed Gino), a 23-year-old explorer, led thirteen scientists and explorers on an ambitious journey to the east coast of Greenland and its vast and forbidding interior.

Their mission: chart and survey the region and establish a permanent meteorological base 8,000 feet high on the ice cap. That plan turned into an epic survival ordeal when August Courtauld, manning the station solo through the winter, became entombed by drifting snow. David Roberts, “veteran mountain climber and chronicler of adventures” (Washington Post), draws on firsthand accounts and rich archival materials to tell the story of this daring expedition and of the ingenious young explorer at its helm.