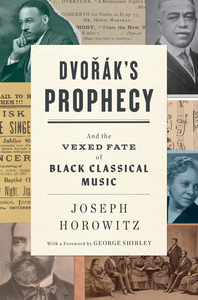 A provocative interpretation of why classical music in America “stayed white”—how it got to be that way and what can be done about it.

In 1893 the composer Antonin Dvorák prophesied a “great and noble” school of American classical music based on the searing “negro melodies” he had excitedly discovered since arriving in the United States a year before. But while Black music would found popular genres known the world over, it never gained a foothold in the concert hall.

Joseph Horowitz ranges throughout American cultural history, from Frederick Douglass and Huckleberry Finn to Gershwin’s Porgy and Bess and the work of Ralph Ellison, searching for explanations. Challenging the standard narrative for American classical music fashioned by Leonard Bernstein and Aaron Copland, he looks back to literary figures—Emerson, Melville and Twain—to ponder how American music can connect with a “usable past”. The result is a new paradigm, that makes room for Black composers, including Harry Burleigh, Nathaniel Dett, William Dawson and Florence Price, to redefine the classical canon.