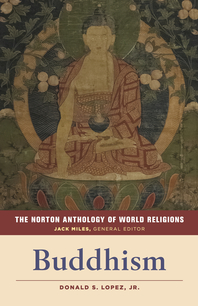 This groundbreaking new Norton Anthology enables the six major, living, international world religions to speak to students in their own words.

This magisterial Norton Anthology, edited by world-renowned scholars, offers a portable library of more than 1,000 primary texts from the world’s major religions. To help readers encounter strikingly unfamiliar texts with pleasure; accessible introductions, headnotes, annotations, pronouncing glossaries, maps, illustrations and chronologies are provided. For readers of any religion or none, The Norton Anthology of World Religions opens new worlds that, as Miles writes, invite us "to see others with a measure of openness, empathy, and good will..."

Unprecedented in scope and approach, The Norton Anthology of World Religions: Buddhism brings together over 100 substantial selections from the fifth century B.C.E. to the present day, organised by country to mirror the spread of Buddhism from India to China, Korea, Japan, Tibet and the United States. The volume features Jack Miles’s illuminating General Introduction—“How the West Learned to Compare Religions”—as well as Donald S. Lopez, Jr.’s “In the World of the Buddha,” a lively primer on the history and core tenets of Buddhism.