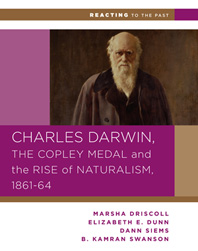 Part of the Reacting to the Past series, Charles Darwin, the Copley Medal, and the Rise of Naturalism thrusts students into the intellectual ferment of Victorian England just after publication of The Origin of Species.

Since its appearance in 1859, Darwin's long awaited treatise in "genetic biology" had received reviews both favourable and damning. Thomas Huxley and Samuel Wilberforce presented arguments for and against the theory in a dramatic and widely publicised face-off at the 1860 meeting of the British Association for the Advancement of Science in Oxford. Their encounter sparked a vigorous, complex debate that touched on a host of issues and set the stage for the Royal Society’s consideration of whether or not they ought to award Darwin the Copley Medal, the society’s most prestigious prize. While the action takes place in meetings of the Royal Society, Great Britain’s most important scientific body, a parallel and influential public argument smoldered over the nature of science and its relationship to modern life in an industrial society.