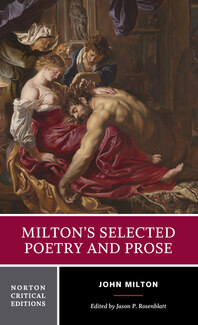 This Norton Critical Edition of Milton’s Selected Poetry and Prose includes “Lycidas”—widely considered the greatest short poem in English—the great tragedy Samson Agonistes, the masque Comus, the brief epic Paradise Regained, and eighteen sonnets as well as other poems. It also contains the complete text of five of Milton’s major prose works, among them Areopagitica and The Doctrine of Discipline and Divorce. Each major work is accompanied by an individual introduction, and all works have ample explanatory annotations.

The major biblical sources that inspired Milton’s writing are reprinted, along with fourteen scholarly interpretations of the major texts. From the wealth of commentary on Milton’s poetry and prose, the editor has chosen those works that can be studied and appreciated by the greatest number of readers, including essays that can easily be paired for discussion in the classroom. Contributors include Anthony Hecht, William Kerrigan, Mary Nyquist, Stanley Fish, Barbara K. Lewalski, John Carey, and Sharon Achinstein, among others.

A Chronology and Selected Bibliography are also included.