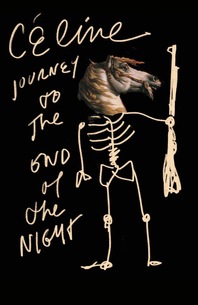 Céline’s masterpiece—colloquial, polemic, hyper realistic—boils over with bitter humor and revulsion at society’s idiocy and hypocrisy: Journey to the End of the Night is a literary symphony of cruelty and violence that hurtles through the improbable travels of the petit bourgeois (and largely autobiographical) antihero, Bardamu: from the trenches of WWI, to the African jungle, to New York, to the Ford Factory in Detroit, and finally to life in Paris as a failed doctor. Ralph Manheim’s pitch-perfect translation captures Céline’s savage energy, and a dynamic afterword by William T. Vollmann presents a fresh, furiously alive take on this astonishing novel.

"The most blackly humorous and disenchanted voice in all of French literature." — John Sturrock, London Review of Books

"My favorite French classic has to be Journey to the End of the Night. It's an epic that takes you all around the world, but the center of the world is Paris, or Céline's delirious, slightly hallucinatory, incredibly poetic vision of it." — Andrew Hussey, The Guardian

"This is the novel, perhaps more than any other, that inspired me to write fiction. Céline showed me that it was possible to convey things that had heretofore seemed inaccessible." — Will Self, The New York Times Book Review

"Teeming with disease, misanthropy, and dark comedy." — The New Yorker

"An extraordinarily gifted writer, he writes like a lunging live wire, crackling and wayward, full of hidden danger." — Alfred Kazin

"One of the greatest novels of the twentieth century. It could be said that without Céline there would have been no Henry Miller, no Jack Kerouac, no Charles Bukowski." — John Banville

"Céline is my Proust!" — Philip Roth