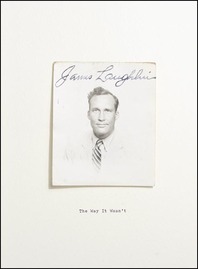 Lavishly illustrated, The Way It Wasn't offers an intimate firsthand encounter with 20th-century Modernism, from the extraordinary man who defined it for America.

James Laughlin—poet, ladies' man, heir to a steel fortune, and the founder of New Directions—was still at work on his autobiography when he died at 83. He left behind personal files crammed with memories and memorabilia: in "M" he is taking Marianne Moore to Yankee games (outings captured here in charming snapshots) to discuss "arcane mammals," and in "N" nearly plunging off a mountain, hunting butterflies with Nabokov ("Volya was a doll in a very severe upper-crust Russian way").

With an accent on humor, The Way It Wasn't is a scrapbook loaded with ephemera—letters and memories, clippings and photographs. This richly illustrated album glitters like a magpie's nest, if a magpie could have known Tennessee Williams, W.C. Williams, Merton, Miller, Stein, and Pound. In "C": "I wish that nice Jean Cocteau were still around. He took me to lunch at the Grand Véfours in the Palais-Royal and explained all about flying saucers. He understood mechanical things. He would advise me." In "P": "There was not much 'gracious living' in Pittsburgh, where at one house, the butler passed chewing gum on a silver salver after coffee." And: "The world is full of a large number of irritating people." In "H" there's Lillian Hellman: "What a raspy character. When I knocked at her door to try to borrow one of her books (hoping to butter her up) she only opened her door four inches and said words to the effect: 'Fuck off, you rapist.'" Marketing in "M": "I think it's important to get the 'troubadours' into the title. That's a 'buy-me' word." In "G": "Olga asked Allen Ginsberg if he was also buying Pound Conference T-shirts for his grandchildren. She was most lovable throughout." In "L": "Wyndham Lewis wrote 'Why don't you stop New Directions, your books are crap.'" And we find love in "L": "Cicero noted that an old love pinches like a crab." But in The Way It Wasn't James Laughlin's love of the crazy world and his crazier authors does not pinch a bit: it glows with wit and enlarges our feeling for the late great twentieth century.

"I urge you to read this unforgettable parade of portraits … which changed my life and those of my peers." — Irving Malin, The Hollins Critic