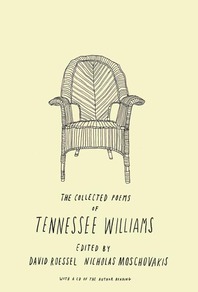 All of the author's previously published poems, including poems from the plays, are in this definitive edition that comes with a CD of the author reading some of his poems in his unmistakable Mississippi drawl.

Few writers achieve success in more than one genre, and yet if Tennessee Williams had never written a single play he would still be known as a distinguished poet. The excitement, compassion, lyricism, and humor that epitomize his writing for the theater are all present in his poetry. It was as a young poet that Williams first came to the attention of New Directions’ founder James Laughlin, who initially presented some of Williams’ verse in the New Directions anthology Five Young American Poets 1944 (before he had any reputation as a playwright), and later published the individual volumes of Williams’s poetry, In the Winter of Cities (1956, revised in 1964) and Androgyne, Mon Amour (1977). In this definitive edition, all of the playwright’s collected and uncollected published poems (along with substantial variants), including poems from the plays, have been assembled, accompanied by explanatory notes and an introduction by Tennessee Williams scholars David Roessel and Nicholas Moschovakis. The CD included with this paperbook edition features Tennessee Williams reading, in his delightful and mesmerizing Mississippi voice, several of the whimsical folk poems he called his "Blue Mountain Ballads," poems dedicated to Carson McCullers and to his longtime companion Frank Merlo, as well as his long early poem, "The Summer Belvedere."

"If it simmers beneath the surface of polite Southern society and bears even a scintilla of barely-disguised moral duality, Williams captured it, nurtured it, and brought it to life on stage through lyrical dialogue, brooding storylines, and exquisitely etched characters." — The 11th Hour

"I did not think it possible to love or respect Tennessee Williams more than I already did, but his collected poems have proved me wrong. The dramatist would not have existed without the poet; they are both separate and indivisible. His ability to channel pain into beauty and his unflinching (and, for its time, remarkably courageous) honesty are revealed in a new light." — Martin Sherman