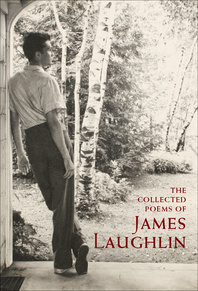 Published in his centenary year, The Collected Poems of James Laughlin encompasses in one majestic volume all of the poetry (with the exception of his verse memoirs, Byways) written by the publisher-poet. Witty, technically brilliant, slyly satiric and heartbreakingly poignant about the vagaries of love, Laughlin charted his own poetic course for over six decades prompting astonishment and joy in those fellow poets who had discovered his unique genius. As Charles Simic enthused, “The secret is out, the publisher of Williams and Pound is himself a great lyric poet.”

Compiled and edited by Peter Glassgold, Laughlin’s chosen poetry editor for the last two decades, The Collected Poems of James Laughlin includes more than 1250 poems from the early lyrics written in Laughlin’s signature “typewriter” metric, to the “long-line” poems of his later years, to the playful antics of his dopplegänger Hiram Handspring, to the trenchant commentary of the five-line pentastichs that occupied his last days. Despite all the awards and accolades that James Laughlin received for his publishing achievements and service to literature, the honor that pleased him most was his election to the American Academy of Arts and Letters (1996)—as a poet.