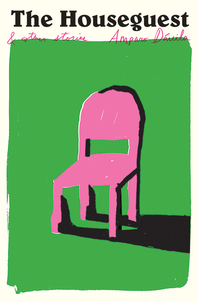 The first collection in English of an endlessly surprising, master storyteller

Like those of Kafka, Poe, Leonora Carrington, or Shirley Jackson, Amparo Dávila’s stories are terrifying, mesmerizing, and expertly crafted—you’ll finish each one gasping for air. With acute psychological insight, Dávila follows her characters to the limits of desire, paranoia, insomnia, and fear. She is a writer obsessed with obsession, who makes nightmares come to life through the everyday: loneliness sinks in easily like a razor-sharp knife, some sort of evil lurks in every shadow, delusion takes the form of strange and very real creatures. After reading The Houseguest—Dávila’s debut collection in English—you’ll wonder how this secret was kept for so long.

"The Houseguest will make you paranoid; you will second guess every shadow and slight movement that catches your eye. Amparo Dávila's prose, her psychological awareness, and the beauty of her characters' misery is encompassing. I cannot believe that this is the first that I am experiencing Dávila in English." — Nick Buzanski, Book Culture

"For the first time, we finally have a collection of her stories translated into English and they’re as good as, as uncanny and mesmerizing as, some of the best work by Kafka or Poe." — Literary Hub

"Dávila is a marvel, and this book casts a delightful and disconcerting spell." — Juan Vidal, Los Angeles Times

"Mexico's answer to Shirley Jackson. Dávila radiates an interesting sense of unease and calamity. For a very long time, women have sought comfort in the darkness when their own lives were full of quiet despair. It is this silent scream which permeates The Houseguest." — Silvia Moreno-Garcia, NPR

"Mexico’s high priestess of horror. The world Dávila imagines weighs on the brain like some sort of delirium." — Robert Rea, Southwest Review

"Like a dream, Dávila’s fictional realm is filled with signs and symbols, with hybrid creatures who appear to defy the laws of nature, and with characters who do not act according to logic or reason. Dávila has said in interviews that one of her favorite subjects is the mysterious, the unknown, that which is not within our grasp. Her writing is intentionally opaque and allows readers to draw a number of different interpretations; it is this intriguing, elusive quality that has perhaps led to her enduring popularity in Mexico." — The Paris Review

"Each of these stories is equal parts Hitchcock film and razor blade: austere, immaculately crafted, profoundly unsettling, and capable of cutting you. Amparo Dávila is Kafka by way of Ogawa, Aira by way of Carrington, Cortazár by way of Somers, and I'm so grateful she's in translation." — Carmen Maria Machado

"The work of Amparo Dávila is unique in Mexican literature. There is no one like her, no one with that introspection and complexity." — Elena Poniatowska

"How is this the first time I am reading Amparo Dávila? And when can I read more from her? In these stories, she creates creates claustrophobic worlds in miniature and populates them with people tormented by things we can't see. Whether she is writing about a wife whose husband brings home a ravenous and frightening guest, a young woman plagued by a not-completely-unwelcome visitor in the night, or a family held hostage by their possibly monstrous son, the horror is subtle—more is suggested than told. Often coupled with these very real terrors is the knowledge that their experiences will be doubted. It is easier for these characters to stay silent than to try and explain the shadowy, strange things that stalk them. Brief and terrifying, The Houseguest leaves one feeling that nothing is solid, that reality is a precarious and ever-changing thing, and that it doesn't take much to render the ordinary unrecognizable." — Lauren P., Powell's Bookstore