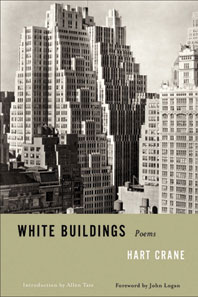 Crane's first collection of poems, published when he was twenty-seven, displays a prodigious gift already at the height of its powers.

This first book of poems by hart Crane, one of his three major collections, was originally published in 1926. The themes in White Buildings are abstract and metaphysical, but Crane's associations and images spring from the American scene. Eugene O'Neill wrote: "Hart Crane's poems are profound and deep-seeking. In them he reveals, with a new insight and unique power, the mystic undertones of beauty which move words to express vision." "Genius is a mystery resistant to reductive analysis, whether sociobiological, psychological, or historical. Like Milton, Pope, and Tennyson, the youthful Crane was a consecrated poet before he was an adolescent."—Harold Bloom "Crane's poems are as distinct from those of other contemporary American poets as one metal from another. This man is a mystical maker: he belongs to a group of poets who create their world, rather than arrange it, and who employ the idiom of their fellows with divine arbitrariness to model the vision of themselves."—The New Republic "In single lines of arresting and luminous quality and in whole poems Mr. Crane reveals that his originality is profound."—Times Literary Supplement  "The line structure is so beautiful in itself, the images so vividly conceived, and the general aura of poetry so indelibly felt that the intelligent reader will move pleasurably among the impenetrable nuances."—New York Times