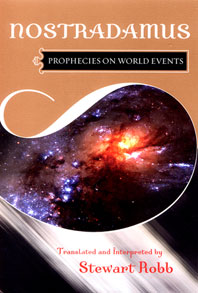 The authoritative volume of the life's work of this extraordinary visionary.

Over the past four centuries, Nostradamus's predictions have proven startlingly accurate. Long before their actual invention, mechanical devices such as the periscope, the submarine, and the airplane appear in accurate detail in the great seer's journals. Other passages foresee Napoleon's conquest, the Bolshevik Revolution, the rise of Hitler, and countless events yet to come. The French occultist won extraordinary fame in his own lifetime, curing thousands in the plague years by unorthodox remedies. He published his first collection of prophecies in 1555, and had composed 1100 quatrains by the time of his death. Stewart Robb's concise translation selects Nostradamus's most lauded prophecies, tracing their symbolism, anagrams, and mythological allusions. Robb's scholarly expertise elucidates every facet of these remarkable writings which remain eerily insightful to this day. Prophecies on World Events remains our potent and vital companion as we enter the twenty-first century.