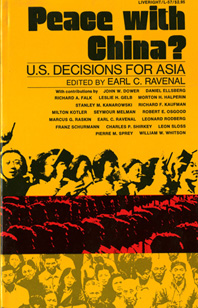 Suddenly, after twenty-five years of official hostility, Americans are confronted with an extraordinary reversal of their government's attitude toward China.

How and why was the course of America's relationship to Asia changed? What are the prospects for detente with the People's Republic of China? How might the new course affect America's economy and her relations with other nations, especially Japan and the USSR?

These questions form the basis of a wide-ranging inquiry held recently at the Institute for Policy Studies in Washington and recorded in Peace with China? Government officials candidly discuss emerging foreign policies. Former members of the Kennedy and Johnson administrations analyze the political and military realities as they saw them. Finally, critics of America's actions in Asia—including spokemen for New Left and revisionist positions—contribute their viewpoints and alternatives.

The result is a unique scrutiny of the complex processes by which the White House, State Department, and Pentagon devise strategies, as well as a lively but scholarly debate on American options in Asia.