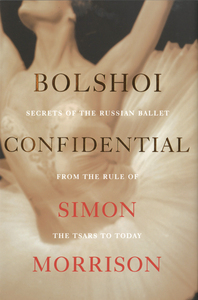 On a freezing night in January 2013, a hooded assailant hurled acid in the face of the artistic director of the Bolshoi Ballet. The crime, organized by a lead soloist, dragged one of Russia’s most illustrious institutions into scandal. The Bolshoi Theater had been a crown jewel during the reign of the tsars and an emblem of Soviet power throughout the twentieth century. Under Putin in the twenty-first century, it has been called on to preserve a priceless artistic legacy and mirror Russia’s neo-imperial ambitions. The attack and its torrid aftermath underscored the importance of the Bolshoi to the art of ballet, to Russia, and to the world.

The acid attack resonated far beyond the world of ballet, both into Russia’s political infrastructure and, as renowned musicologist Simon Morrison shows in his tour-de-force account, the very core of the Bolshoi’s unparalleled history. With exclusive access to state archives and private sources, Morrison sweeps us through the history of the storied ballet, describing the careers of those onstage as well as off, tracing the political ties that bind the institution to the varying Russian regimes, and detailing the birth of some of the best-loved ballets in the repertoire.

From its disreputable beginnings in 1776 at the hand of a Faustian charlatan, the Bolshoi became a point of pride for the tsarist empire after the defeat of Napoleon in 1812. After the revolution, Moscow was transformed from a merchant town to a global capital, its theater becoming a key site of power. Meetings of the Communist Party were hosted at the Bolshoi, and the Soviet Union was signed into existence on its stage. During the Soviet years, artists struggled with corrosive censorship, while ballet joined chess tournaments and space exploration as points of national pride and Cold War contest. Recently, a $680 million restoration has restored the Bolshoi to its former glory, even as prized talent has departed.

As Morrison reveals in lush and insightful prose, the theater has been bombed, rigged with explosives, and reinforced with cement. Its dancers have suffered unimaginable physical torment to climb the ranks, sometimes for so little money that they kept cows at home whose milk they could sell for food. But the Bolshoi has transcended its own fraught history, surviving 250 years of artistic and political upheaval to define not only Russian culture but also ballet itself. In this sweeping, definitive account, Morrison demonstrates once and for all that, as Russia goes, so goes the Bolshoi Ballet.

“The insider look in Bolshoi Confidential is incredibly rich and makes this book a page-turner…Breathtakingly complicated life stories of both people and productions parade through the pages…Its central figures, like Plisetskaya, jump off its pages complex and alive.” — Daria Khitrova, New York Times

“Morrison turns to the past in order to unpack the conundrum of the Bolshoi within the enigma-wrapped, mystery-obscured riddle of the Russian state…All of this makes for good, even great, fodder…Sex scandals, double-suicide pacts, bribery, arson, executions, prostitution rings, embezzlement, starving orphans, dead cats in lieu of flowers, and ballerinas refusing to shave their armpits.” — Madison Mainwaring, The New Republic

“Masterful. . . . Bolshoi Confidential . . . is much more than a compendium of ballerinas behaving badly. Rather, it offers a rich, fascinating and nuanced examination of the role of the arts in Russian history, one that highlights their profound importance to the creation of a national identity and their troubled relationship with the country’s rulers.” — Douglas Smith, Wall Street Journal

“Simon Morrison’s Bolshoi Confidential lifts the curtain on Russia’s best-known cultural institution. An intoxicating mix of grandeur and gossip, it charts luminous performances on stage and sordid machinations in the wings from the age of Catherine the Great to that of Vladimir Putin…Sweeping and authoritative.” — Lucy Ash, The Guardian

“A sweeping, grandly intriguing story at the interface of art and power. . . . Morrison frames his story, always readable and brimming with curious anecdotes, with the recent, newsworthy acid attack on artistic director Sergei Filin, a strange episode that exposed not just clashes of individual personalities, but also competing views of what the Bolshoi should be, some of which may have emanated from inside the walls of the neighboring Kremlin. A must for ballet buffs . . . . [and] a look backstage that is both lively and learned.” — Kirkus (starred review)

“Another marvelously informative book from Simon Morrison, dishing this time on Russia’s great musical theater, onstage and off. It is a wonderful read, full of intriguing spectacle and spectacular intrigue.” — Richard Taruskin, author of The Oxford History of Western Music

“Simon Morrison has written an engrossing history of one of Russia’s most enduring cultural institutions. Bolshoi Confidential deftly shatters the distinctions between high-brow and low-brow, art and politics, authority and violence.” — Amanda Foreman, author of Georgiana and A World on Fire

“A colorful and erudite view on Russia through the tumultuous history of the sumptuous Bolshoi.” — Peter Pomeranzev, author of Nothing is True and Everything is Possible

“Simon Morrison’s Bolshoi Confidential is a magisterial portrait of the art, intrigue, and politics buffeting Russia’s great cultural institution, the Bolshoi Ballet.” — Janice Ross, author of Like A Bomb Going Off: Leonid Yakobson and Ballet As Resistance in Soviet Russia

“Morrison sweeps readers through the storied company’s 240-year history, describing key figures onstage and off, political ties to various regimes, and the births of many famous ballets.” — Dance Studio Life