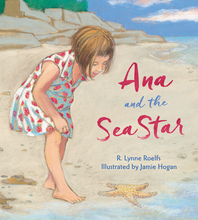 This beautiful picture book celebrates the power of imagination and an appreciation of the natural world.

A young girl finds a starfish on the beach and wants to show it to her mother at home, but doesn’t want to take it from its home. With encouragement from her dad and a little imagination, Ana is able to let the sea star go and yet keep it with her at the same time.

This beautiful picture book celebrates the power of imagination and an appreciation of the natural world.

Back matter invites children into the lives and experiences of a jellyfish, stingray, loggerhead turtle and other sea creatures.

“The sea star waited as the sand settled around it.

Then slowly, slowly it crept home to the sea grass meadow

on hundreds of tiny tube feet.”

“Ana watched a snowy plover grab its dinner from the surf.

Then the tiny bird skittered across the sand.

Hogan has in the view of this writer entered the sacred pantheon of books worthy of Caldecott attention with the quietly powerful and sensory Ana and the Sea Star. That Roelfs’s life-affirming story, told with poetic grace was the springboard makes the completed work all that more distinguished....There is an acute literary kinship between McCloskey’s unforgettable sensory immersion and Ana and the Sea Star, a work that similarly places youthful wishes front and center during the most formative years.

Young readers are treated to an illustrated glossary featuring the sea creatures encountered in the text along with a four or five sentence engaging description of each.  Making the connection of human to animal life is a similar showcasing of Ana, defined as a homo sapien, a vertebrate like some of the others, but most notably the youngest species of them all and one with the unique power of imagination.

” — Sam Juliano, Wonders in the Dark

When Ana and her papa discover a sea star during their walk on the beach, Ana wants to take it home. Papa helps her understand that the sea star is alive and must go back to the ocean. He then consoles her by painting pictures with words that describe the sea star's home under the sea. When Ana gets home, she tells her mother about the sea star using Papa's technique. Hogan's painterly and realistic illustrations take viewers to the beach and under the sea. Her depictions of the natural world evoke the joy of the sea, the salty air, the sand, and the animals that live in this habitat. Hogan's experience as an island dweller in Maine truly shines. Roelfs's text has a lot going on. It covers respecting the natural world, animals of the sea, and using one's imagination through much description and dialogue. The illustrations work well at grounding and depicting the abundant text. There is back matter that provides further description and facts about the animals mentioned in the story, including Ana.