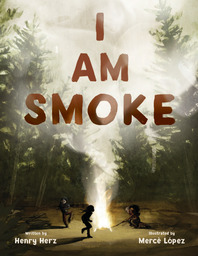 Smoke itself acts as narrator, telling us how it has served humankind since prehistoric times in signaling, beekeeping, curing and flavouring food, religious rites, fumigating insects and myriad other ways.

Smoke speaks in mesmerising riddles: “I lack a mouth, but I can speak… I lack hands, but I can push out unwanted guests… I’m gentler than a feather, but I can cause harm…” This rhythmically powerful narration is complemented by illustrations in which swirling smoke was captured on art paper held over smoky candle flames, and the dancing smoke textures were then deepened and elaborated with watercolours and Photoshop finishes. With this unique method, Mercè López “let the smoke decide how the idea I had in mind would dance with it, giving freedom to the images”. The resulting illustrations are astounding, and they resonate with the otherworldly text.