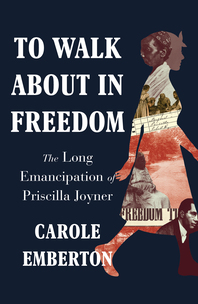 Priscilla Joyner was born into the world of slavery in 1858. Her life story, which she recounted in an oral history decades later, captures the complexity of emancipation. Based on interviews that Joyner and formerly enslaved people had with the Depression-era Federal Writers Project, historian Carole Emberton draws a portrait of the steps they took in order to feel free, something no legal mandate could instill.

Joyner’s life exemplifies the deeply personal, highly emotional nature of freedom and the decisions people made, from the seemingly mundane to the formidable: what to wear, where to live, what work to do and who to love. Joyner’s story reveals the many paths forged by freedmen and freedwomen to find joy and belonging during Reconstruction, despite the long shadow slavery cast on their lives.