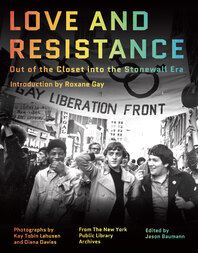 These indelible images are among the hundreds housed in the New York Public Library’s archive of photographs of LGBT history from photojournalists Kay Tobin Lahusen and Diana Davies.

This powerful collection—which captures the energy, humour and humanity of the ground-breaking protests that surrounded the Stonewall Riots—celebrates the diversity of the LGBT rights movement, both in the subjects of the photos and by presenting Kay Tobin Lahusen and Diana Davies’ distinctive work and perspectives in conversation with each other. A preface, captions and part introductions from curator Jason Baumann provide illuminating historical context. And an introduction from best-selling author Roxane Gay speaks to the continued importance of these iconic photos of resistance.

“... a collection of over 100 powerful images capturing the LGBTQ civil rights movement of the 1960s and 1970s, and the protests that surrounded the pivotal Stonewall riots.” — All About History

“Love and Resistance contains no photographs from Stonewall – not because Stonewall doesn’t matter but because the community was bound to erupt at some point, and the conditions undergirding that inevitability are of more importance to the edition than the eruption itself. It is also the only book here to focus primarily on queer women, whose contributions to gay liberation are often minimized when the focus is on Stonewall (the bar was primarily for white, cisgender men). Instead, we find personal portraits leading up to, surrounding, and following on from the events of that summer...” — Times Literary Supplement