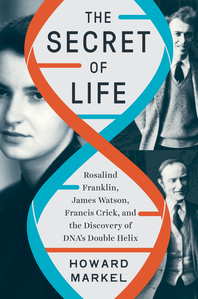 The Past Will No Longer Help Us Navigate the Current Pandemic

Howard Markel in The Atlantic

A definitive history of the race to unravel DNA’s structure, by one of our most prominent medical historians.

Biologist James Watson and physicist Francis Crick’s 1953 revelation about the double helix structure of DNA is the foundation of virtually every advance in our modern understanding of genetics and molecular biology. But how did Watson and Crick do it—and why were they the ones who succeeded?

In truth, the discovery of DNA’s structure is the story of a race among five scientists for advancement, fame and immortality: Watson, Crick, Rosalind Franklin, Maurice Wilkins and Linus Pauling. They were fascinating and brilliant, with strong personalities that often clashed. But it is Rosalind Franklin who becomes a focal point for Howard Markel. The Secret of Life is a story of genius and perseverance but also a saga of cronyism, misogyny, anti-Semitism and misconduct. Markel brilliantly recounts the intense intellectual journey—and the fraught personal relationships—that resulted in the discovery of DNA.

"Howard Markel’s brilliant book examining the discovery of DNA is a ‘must read’ for biologists and historians. But this is also a book for every reader; it brings to life the discovery of life itself. From Watson, Crick, and Franklin, to the dozens of characters that Markel includes, The Secret of Life covers vast and important ground... An indispensable work." — Siddhartha Mukherjee, Pulitzer Prize–winning author of The Emperor of All Maladies and The Gene

"The discovery of DNA is one of history’s light switch moments, when the world of science—indeed, humanity—changed forever. Though much has been written on the subject, nothing remotely compares to Howard Markel’s magisterial account. Elegantly written, packed with fresh insights gleaned from a wealth of original sources, The Secret of Life takes us into the minds and laboratories of the leading players, highlighting their brilliance, their ambitions, and their sometimes questionable ethical behavior. This book is the merging of a seminal subject and superb author—one of the leading medical historians of our era. The result is truly remarkable." — David Oshinsky, Professor of History and Medicine, NYU, and Pulitzer Prize–winning author of Polio: An American Story

"Howard Markel’s wonderfully-written book, The Secret of Life, explores the story of genetics up to the revolutionary mid-20th century decoding of the structure of DNA. And it does so in such brilliant detail that the result is—even for those who might think they know this story—a tale that proves fresh, provocative, startlingly insightful, and addictively fun to read." — Deborah Blum, Pulitzer Prize–winning author of The Poison Squad: One Chemist’s Single-Minded Crusade for Food Safety at the Turn of the Twentieth Century

"The 1953 discovery of DNA’s double-helix structure might be one of science’s most fascinating and oft-told stories. Yet much about it is still contentious… Howard Markel’s fine book focuses on the role of Rosalind Franklin, whose X-ray crystallography image of DNA — crucial to Francis Crick and James Watson’s breakthrough — was used without her permission." — Andrew Robinson, Nature