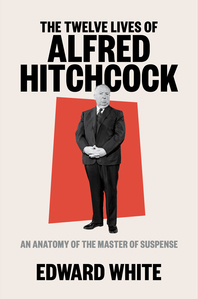 A fresh, innovative interpretation of the life, work and lasting influence of the twentieth century’s most iconic filmmaker.

In The Twelve Lives of Alfred Hitchcock Edward White explores the Hitchcock phenomenon—what defines it, how it was invented, what it reveals about the man at its core and how its legacy continues to shape our cultural world.

The book’s twelve chapters illuminate different aspects of Hitchcock’s life and work: “The Boy Who Couldn’t Grow Up”; “The Murderer”; “The Auteur”; “The Womanizer”; “The Fat Man”; “The Dandy”; “The Family Man”; “The Voyeur”; “The Entertainer”; “The Pioneer”; “The Londoner”; “The Man of God”. Each of these angles reveals something fundamental about the man he was and the mythological creature he has become, presenting not just the life Hitchcock lived, but also the various versions of himself that he projected and those projected on his behalf.

White’s portrayal illuminates a vital truth: Hitchcock was more than a Hollywood titan; he was the definitive modern artist and his significance reaches far beyond the confines of cinema.

"A provocative new way of thinking about biography... The radial structure vibrates, like Hitchcock’s best films, with intuition and mystery." — Parul Sehgal, The New York Times

"Edward White’s The Twelve Lives of Alfred Hitchcock is a pinata of literary pleasures. Learned and graceful, thoughtful and provocative, White cracks the Hitchcock code with deft analysis and fine writing. It’s a high-stepping performance full of humor and depth. Walking a tightrope between criticism and biography, White places both the man and his myth in the cultural landscape of his times. In the process, he returns us to the films with a much more informed eye. A book to keep and to return to." — John Lahr, author of Tennessee Williams: Mad Pilgrimage of the Flesh

"Perceptive and gracefully written, “The Twelve Lives of Alfred Hitchcock” is a bracing study of the master of suspense... It is a rare book that could pleasurably be twice as long." — The Economist

"[The Twelve Lives of Alfred Hitchcock] is full of such sharp observations, offering a Hitchcock whose art endures alongside—and in some ways depends upon—his insecurities and mistakes." — Farran Smith Nehme, The Wall Street Journal

"White combines his interpretive zest with sensitivity, clarity and knife-sharp phrasing, smartly dedicating each of his 12 chapters to a different facet of the director's personality: the voyeur, the entertainer, the womaniser, the family man… Anatomising someone of Hitchcock's stature risks an equally chaotic frenzy of stabs, but with these 12 scalpel strokes White cuts close to his subject's heart." — Victoria Segal, The Sunday Times

"... innovative biography of Alfred Hitchcock... Tracking Hitchcock's contemporary influence, White is an enterprising tour guide... I was happy to be reminded of Cornelia Parker’s PsychoBarn, constructed in 2016 on the roof of the Metropolitan Museum in New York... And thanks to White, I went on an excursion to Leytonstone, Hitchcock’s birthplace in east London... I was also pleased to learn from White about the lewd Hitchcock tribute in Eminem’s Music to Be Murdered By." — Peter Conrad, The Observer

"The great strength of “The Twelve Lives” is that a reader comes away from it with a vivid sense of how Hitchcock ignited screen masterpieces with the fires of his inner discord and contradictions." — Alexander Kafka, The Washington Post

"... a fascinating new study... [The Twelve Lives of Alfred Hitchcock] is overflowing with anecdotes, memories and curiosities… the book offers lots of insights into what made him such a revolutionary director of masterpieces such as North by Northwest and Rear Window." — Martin Chilton, Books of the Month May 2021, The Independent

"Rather than forcing Hitchcock’s often contradictory guises into a coherent whole, this deft account takes them as a starting point. The result is a nuanced and frequently unfamiliar portrait. Essays on the director’s sartorial and culinary preoccupations and his penchant for publicity—chapter headings include “The Fat Man” and “The Dandy”—yield new perspectives on a multifaceted career." — Briefly Noted, The New Yorker

"... masterful study... There have been thousands of books about Hitchcock. This is the best of the bunch, a brilliant investigation of a man full both of ego and fragile self-esteem, a sour mixture of self-disgust and self-regard. Hitchcock was aware that under anyone’s calm surface, dark forces were ‘springing and swirling within'. To investigate these notions, White chops up his book into a dozen highly original chapters homing in on such themes as Hitchcock the Fatty, the Dandy, the Voyeur, the Cockney, and so forth." — Roger Lewis, The Daily Mail

"Using an approach that manages to balance chronology and theme, [White] presents the subject from a dozen angles, many of them in implicit opposition… his use of sources is inventive, and he exhibits breezy authority on a range of relevant themes, from dietetics and mid-century slimming to Catholic prayer." — Leo Robson, New Statesman

"Running the gamut from 'The Boy Who Couldn't Grow Up' to 'The Man Of God', White's book... deftly divvies up the director's 80 years into a dozen readable chunks. If Hitch was, as this author suggests, "a codex of his times," this is as good a way as any to decipher him." — Neil Smith, Total Film

"It's an elegant, divertingly readable performance... it's the affinities, the connecting threads and evocative side-glances with which White salts his text that repeatedly spark new insights into both the man and his work... as this entertaining and provocative book shows, a lot of satisfaction can be derived from exploring the mystery." — Philip Kemp, Sight & Sound

"It feels a fresh way to organise a familiar story… [The Twelve Lives of Alfred Hitchcock] allows White to examine the binaries that run through Hitchcock’s life; the man who had both an enormous ego and fragile self-esteem, the uxorious husband who was also lecherous, the dandy in the body of a fat man and the end-of-the-pier entertainer who could also be framed as an avant-garde artist." — Teddy Jamieson, The Herald

"While Hitchcock has been the subject of more books than any other filmmaker, the man behind the titillating, terrifying mask remains an enigma… Edward White’s answer to this conundrum is to dismember Hitchcock into a dozen parts." — Christopher Bray, The Mail on Sunday

"The Twelve Lives of Alfred Hitchcock by Edward White considers the many different aspects of the great film-maker’s life and work, including family man, Londoner, pioneer and dandy, and how they often intertwined." — Choice

"[The Twelve Lives of Alfred Hitchcock] is an original, absorbing study which captures the contradictory nature of ‘the Master of Suspense’." — Book of the Week, The Week

"... elegant and erudite biography… More than 100 books have been written about the Hitchcock phenomenon, but this must be one of the most straightforwardly enjoyable. More a collection of essays than a full-blown biography... [The Twelve Lives of Alfred Hitchcock] will send readers back to the films with renewed appreciation." — Andrew Lynch, The Business Post

"The number of tomes written about Alfred Hitchcock could fill a large bookcase, but Edward White takes a novel approach. In The Twelve Lives of Alfred Hitchcock, he looks at a dozen aspects of the great director's life, work and influence. It's a ploy to entertain and enlighten even those of us who think we know Hitch inside out. White offers new interpretations of some of his most celebrated films but seeks to uncover the man beneath the myth that Hitchcock, himself, so carefully curated." — Summer Reads, The Irish Independent

"White writes with the contemporary moment in mind yet avoids twisting his subject’s accomplishments to suit new tastes. His book is entirely accessible without being glib or sensationalist; it is well-researched and wide-ranging in its cultural references without being pedantic or effete. I know of no other book on Hitchcock that wears its breadth of knowledge so lightly... One completes this book feeling one knows Hitchcock as well as he could be known, and with renewed respect for his gifts and his influence on culture." — Paula Marantz Cohen, Times Literary Supplement