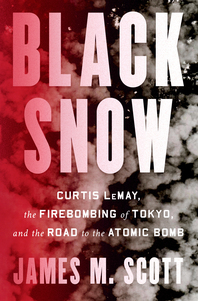 The unprecedented fire raid that incinerated Tokyo, helped win the war and marked a major shift in American military policy

Seven minutes past midnight on 9 March 1945, nearly 300 American B-29s thundered into the skies over Tokyo. Their payloads of incendiaries ignited a more than 1,800-degree firestorm that liquefied asphalt and vaporised thousands; sixteen square miles of the city were flattened and more than 100,000 men, women and children were killed. Black Snow is the story of this devastating operation, orchestrated by Major General Curtis LeMay, who famously remarked: “If we lose, we’ll be tried as war criminals”.

James M. Scott reconstructs in granular detail that horrific night, and describes the development of the B-29, the capture of the Marianas for use as airfields and the change in strategy from high-altitude daylight “precision” bombing to low-altitude nighttime incendiary bombing. Most importantly, the raid represented a significant moral shift for America, marking the first time commanders deliberately targeted civilians—which helped pave the way for the atomic bombing of Hiroshima and Nagasaki five months later.

"Black Snow brilliantly vivifies the horrific reality of the most destructive air attack in history, against Tokyo on the night of March 9-10, 1945. James Scott deftly employs sharply etched portraits of individuals of all stations and nationalities to survey the global, technological, and moral backdrop of the cataclysm, including the searing experiences of Japanese trapped in a gigantic firestorm. This riveting account illuminates an historical moment of profound contemporary relevance." — Richard B. Frank, author of Tower of Skulls: A History of the Asia-Pacific War: July 1937-May 1942

"The firebombing of Japan is one of the most gut-wrenching and controversial chapters in modern history. James M. Scott’s Black Snow is a brilliant, fast moving, utterly absorbing, and devastating account of the full price of victory in the Pacific." — Alex Kershaw, New York Times best-selling author of Against All Odds

"James M. Scott brings to life with painstaking detail and humanity the terror and plight and hopes of Japanese citizens in their cities, and US pilots in the air—their duties, their misgivings, their conflicted reactions, their sense of victory, and their moral survival off that victory. You realize you’ve never read this story before in this way, with these long views of history and such collar-grabbing intensity. Black Snow raises profound questions about how peace is made during one of America’s most turbulent periods on the world stage, and it speaks clearly to us today. You won’t put it down." — Doug Stanton, #1 New York Times best-selling author of In Harm's Way and Horse Soldiers