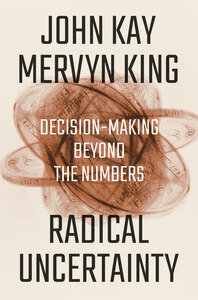 Some uncertainties are resolvable. The insurance industry’s actuarial tables and the gambler’s roulette wheel both yield to the tools of probability theory. Most situations in life, however, involve a deeper kind of uncertainty, a radical uncertainty for which historical data provide no useful guidance to future outcomes. Radical uncertainty concerns events whose determinants are insufficiently understood for probabilities to be known or forecasting possible. Before President Barack Obama made the fateful decision to send in the Navy Seals, his advisers offered him wildly divergent estimates of the odds that Osama bin Laden would be in the Abbottabad compound. In 2000, no one—not least Steve Jobs—knew what a smartphone was; how could anyone have predicted how many would be sold in 2020? And financial advisers who confidently provide the information required in the standard retirement planning package—what will interest rates, the cost of living, and your state of health be in 2050?—demonstrate only that their advice is worthless.

The limits of certainty demonstrate the power of human judgment over artificial intelligence. In most critical decisions there can be no forecasts or probability distributions on which we might sensibly rely. Instead of inventing numbers to fill the gaps in our knowledge, we should adopt business, political, and personal strategies that will be robust to alternative futures and resilient to unpredictable events. Within the security of such a robust and resilient reference narrative, uncertainty can be embraced, because it is the source of creativity, excitement, and profit.

"An elegant and careful guide to thinking about personal and social economics, especially in a time of uncertainty. The timing is impeccable." — Christine Kenneally, New York Times Book Review

"In this profound yet practical book, Kay and King admit the obvious—that in crucial domains, we do not, will not, cannot know what is going on—and show, nevertheless, how to retain the ability to function." — Paul Romer, Nobel laureate

"Many books will make a reader better informed or smarter. This is one of very few that will make a reader much wiser. You will live differently and better after you grasp Kay and King’s seminal lessons about radical uncertainty." — Lawrence H. Summers, US Treasury Secretary 1999-2001, and Charles W. Eliot University Professor at Harvard University

"John Kay and Mervyn King want more people to grasp the old distinction between risk and uncertainty forgotten by a later generation of economists. Too many of life’s uncertainties are presented to us as if they are calculable risks, especially in the realm of finance. We should focus on the truly calculable risks, they argue, and stop pretending we can predict situations of radical uncertainty." — Niall Ferguson, Milbank Family Senior Fellow, the Hoover Institution, Stanford