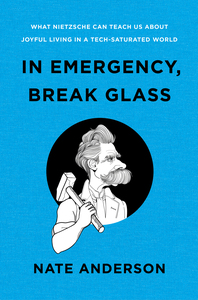 A lively and approachable meditation on how we can transform our digital lives if we let a little Nietzsche in.

Who has not found themselves scrolling endlessly on screens and wondered: Am I living or distracting myself from living? In Emergency, Break Glass adapts Friedrich Nietzsche’s passionate quest for meaning into a world overwhelmed by “content.”

Written long before the advent of smartphones, Nietzsche’s aphoristic philosophy advocated a fierce mastery of attention, a strict information diet, and a powerful connection to the natural world. Drawing on Nietzsche’s work, technology journalist Nate Anderson advocates for a life of goal-oriented, creative exertion as more meaningful than the “frictionless” leisure often promised by our devices. He rejects the simplicity of contemporary prescriptions like reducing screen time in favour of looking deeply at what truly matters to us, then finding ways to make our technological tools serve this vision. With a light touch suffused by humour, Anderson uncovers the impact of this “yes-saying” philosophy on his own life—and perhaps on yours.