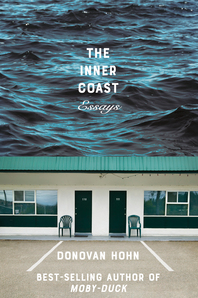 Prize-winning essays on our changing place in the natural world by the best-selling author of Moby-Duck.

Writing in the grand American tradition of Annie Dillard and Barry Lopez, Donovan Hohn is an “adventurous, inquisitive, and brightly illuminating writer” (New York Times). Since the publication of Moby-Duck a decade ago, Hohn has been widely hailed for his prize-winning essays on the borderlands between the natural and the human. The Inner Coast collects ten of his best, many of them originally published in such magazines as the New York Times Magazine and Harper’s, which feature his physical, historical and emotional journeys through the American landscape.

By turns meditative and comic, adventurous and metaphysical, Hohn writes about the appeal of old tools, the dance between ecology and engineering, the lost art of ice canoeing and Americans’ complicated love/hate relationship with Thoreau. The Inner Coast marks the return of one of our finest young writers and a stylish exploration of what Guy Davenport called “the geography of the imagination.”