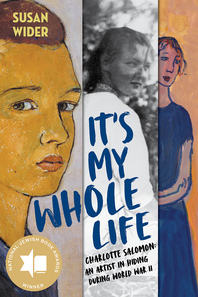 A gripping biography of Charlotte Salomon, and an ode to how art can capture both life’s everyday beauty and its monumental horrors

Charlotte Salomon was a German-Jewish artist born in Berlin. She is remembered for her autobiographical series of paintings, Life? or Theater?, which consists of 769 individual works painted between 1941 and 1943 while she was in hiding from the Nazis in the south of France, and which has been called a painted parallel to Anne Frank’s The Diary of a Young Girl and an early graphic novel. In 1943, she entrusted her collection of paintings to a friend. In October of that year, she was captured and deported to Auschwitz, where she and her unborn child were gassed to death upon arrival.

It’s My Whole Life covers Charlotte’s remarkable life from her childhood and art school days to her time as a refugee in Nazi-occupied France, where she created the largest single work of art created by a Jew during the Holocaust. Compellingly written and accompanied by vivid colour photographs of Salomon’s artwork, Susan Wider has crafted an illuminating portrait of an enigmatic and evanescent young artist.