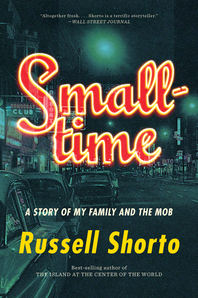 Best-selling author Russell Shorto, praised for his incisive works of narrative history, never thought to write about his own past. He grew up knowing his grandfather and namesake was a small-town mob boss but maintained an unspoken family vow of silence. Then an elderly relative prodded: You’re a writer—what are you gonna do about the story?

Smalltime is a mob story straight out of central casting—but with a difference, for the small-town mob, which stretched from Schenectady to Fresno, is a mostly unknown world. The location is the brawny postwar factory town of Johnstown, Pennsylvania. The setting is City Cigar, a storefront next to City Hall, behind which Russ and his brother-in-law, “Little Joe,” operate a gambling empire and effectively run the town.Smalltime is a riveting American immigrant story that travels back to Risorgimento Sicily, to the ancient, dusty, hill-town home of Antonino Sciotto, the author’s great-grandfather, who leaves his wife and children in grinding poverty for a new life—and wife—in a Pennsylvania mining town. It’s a tale of Italian Americans living in squalor and prejudice, and of the rise of Russ, who, like thousands of other young men, created a copy of the American establishment that excluded him.An urgent and intimate exploration of three generations of the American immigrant experience. Smalltime is a moving, wryly funny and richly detailed memoir by a masterful writer of historical narrative.

"[A] master of historical narrative…[O]nce Shorto’s on the highway, steering us along with his usual humor and eye for quirky detail, settling an hour from his hometown for easy access, we are with him. All the way." — The New York Times Book Review

"Shorto has produced something that feels altogether fresh, a street-level portrait of how his late grandfather helped build what amounted to a Mafia small business…Shorto is a terrific storyteller…few of his words are wasted, a delight these days." — The Wall Street Journal

"With Smalltime, Shorto traces his decision to learn the truth about his family’s past, discover its long-buried secrets, and explore unforgotten slights and how decisions made decades and decades ago continue to leave their mark." — Washington Post