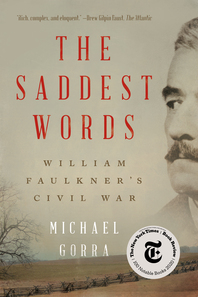 Michael Gorra, one of America’s most preeminent literary critics, asks how we read William Faulkner in the twenty-first century.

Michael Gorra asks provocative questions in this historic portrait of William Faulkner and his world. He explores whether William Faulkner should still be read in this new century and asks what his works tell us about the legacy of slavery and the American Civil War, the central quarrel in America’s history.

Born in 1897 in Mississippi, Faulkner wrote such iconic novels as Absalom, Absalom! and The Sound and the Fury, creating in Yoknapatawpha County the richest gallery of characters in American fiction, his achievements culminating in the 1949 Nobel Prize in Literature. But given his works’ echo of "Lost Cause" romanticism, his depiction of black characters and black speech, and his rendering of race relations in a largely unreconstructed South, Faulkner demands a sobering reevaluation. Interweaving biography, absorbing literary criticism and rich travelogue, The Saddest Words recontextualises Faulkner, revealing a civil war within him, while examining the most plangent cultural issues facing American literature today.

"Michael Gorra is one of the finest critical minds at work in literature today, and this masterly reassessment of William Faulkner could not be more timely. Faulkner is a central figure in American fiction and, indeed, in American history, a voice as resonant in today's troubled world as it was in his own time. Gorra asks hard questions about the novelist and the man, and is unflinching in answering them. This is a momentous and thrilling book." — John Banville

"Gorra’s complex and thought-provoking meditation on Faulkner is rich in insight, making the case for the novelist’s literary achievement and his historical value — as an unparalleled chronicler of slavery’s aftermath, and its damage to America’s psyche." — 100 Notable Books of 2020, The New York Times Book Review

"Faulkner’s enduring, ubiquitous quote that ‘the past is never dead’ might be a fitting epitaph for this new book. In this timely re-examination, Gorra considers how Faulkner should be read in the 21st century, with a focus on the depiction of Black people and racism in his fiction." — Joumana Khatib, The New York Times

"Eloquent analysis... Graceful... A nimble hybrid that blends literary analyses with history, biography, and personal narrative... [Gorra] movingly narrates the debacles at Bull Run and Gettysburg and effortlessly slides from astute analyses of Faulkner’s best stories, like ‘Mountain Victory,’ to such novels as The Sound and the Fury, The Unvanquished (1938), and Go Down, Moses (1942)." — Brenda Wineapple, The New York Review of Books

"Powerful... Mr. Gorra demonstrates convincingly that this unshakable past for Faulkner came increasingly to involve race.... For Mr. Gorra, Faulkner’s fiction should be read these days for 'the drama and struggle and paradox and power of his attempt to work through our history, to wrestle or rescue it into meaning.' Reading Faulkner today we discover just how much imagination and courage can be required to face the past." — Randall Fuller, The Wall Street Journal

"Gorra’s well-conceived, exhaustively researched book probes history’s refusals... Rich in insight... Timely and essential as we confront, once again, the question of who is a citizen and who among us should enjoy its privileges." — Ayana Mathis, The New York Times Book Review

"Michael Gorra, an English professor at Smith, believes Faulkner to be the most important novelist of the 20th century. In his rich, complex, and eloquent new book, The Saddest Words: William Faulkner’s Civil War, he makes the case for how and why to read Faulkner in the 21st by revisiting his fiction through the lens of the Civil War, 'the central quarrel of our nation’s history.' In setting out to explore what Faulkner can tell us about the Civil War and what the war can tell us about Faulkner, Gorra engages as both historian and literary critic. But he also writes, he confesses, as an 'act of citizenship.'" — Drew Gilpin Faust, The Atlantic