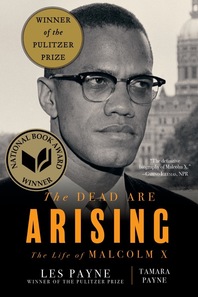 An epic, award-winning biography of Malcolm X that draws on hundreds of hours of personal interviews and rewrites much of the known narrative.

Les Payne, the renowned Pulitzer Prize–winning investigative journalist, embarked in 1990 on a nearly thirty-year-long quest to create an unprecedented portrait of Malcolm X, one that would separate fact from fiction. The result is this historic, National Book Award–winning biography, which interweaves previously unknown details of Malcolm X’s life—from harrowing Depression-era vignettes to a moment-by-moment retelling of the 1965 assassination—into an extraordinary account that contextualizes Malcolm X’s life against the wider currents of American history. Bookended by essays from Tamara Payne, Payne’s daughter and primary researcher, who heroically completed the biography after her father’s death in 2018, The Dead Are Arising affirms the centrality of Malcolm X to the African American freedom struggle.