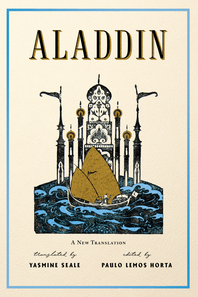 How Aladdin's story was forged in Aleppo and Versailles

Yasmine Seale speaks to The Guardian about her new translation of Aladdin.

A dynamic French-Syrian translator, lauded for her lively poetic voice, tackles the enchanted world of Aladdin in this sparkling new translation.

Long defined by film adaptations that have portrayed Aladdin as a simplistic rags-to-riches story for children, this work of dazzling imagination—and occasionally dark themes—now comes to vibrant new life. “In the capital of one of China’s vast and wealthy kingdoms”, begins Shahrazad, there lived Aladdin, a rebellious fifteen-year-old who falls prey to a double-crossing sorcerer and is ultimately saved by a princess.One of the best-loved folktales of all time, Aladdin has been capturing the imagination of readers, illustrators and filmmakers since an eighteenth-century French publication first added the tale to The Arabian Nights. Here is an elegant, eminently readable rendition of Aladdin in what is destined to be a classic for decades to come.

"It’s not every day you come across a new translation of The Arabian Nights, but the French Syrian writer, Yasmine Seale, has rendered afresh the 18th-century version of Aladdin by Antoine Galland, and has done a cracking job…" — Family favourites: children’s books for Christmas reviewed, The Spectator

"Elegant... Seale is careful to frame her translation with an account of Shahrazad herself, which not only gives it a sense of urgency, but also reminds us that the narrative voice is a female one—a fact that other adaptations and translations often miss. This world is one in which a woman can use the gift of story-telling to navigate the power of men. And this framing breathes new life into the female cast of Aladdin’s story." — Hetta Howes, Times Literary Supplement

"This new translation of the classic tale is, like the lamp at its center, darker, grubbier, and more twisted than its Disneyfied iteration, emphasizing its transgressive qualities.... Seale’s text has a fluidity and an elegance that give even this diet of “dreams, smoke, and visions” a satisfying heft." — The New Yorker

"... a charming rendition of Aladdin…" — The National

"In her new translation of Aladdin, Seale provides a scintillating lens through which to view ‘the tale that has never stopped travelling’: the story of a boy and his magical lamp. Paired with a riveting introduction by Paulo Lemos Horta, Seale’s work acknowledges the tangled history of Aladdin, from its initial appearance in French literature in 1709 to its controversial Disney adaptation in 1992..." — Madeline Day, The Paris Review