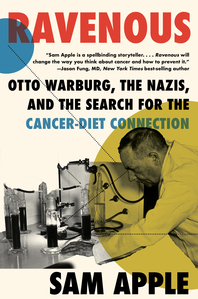 The extraordinary story of the Nazi-era scientific genius who discovered how cancer cells eat—and what it means for how we should.

The Nobel laureate Otto Warburg was widely regarded as one of the most important biochemists of the twentieth century. A Jewish homosexual living openly with his partner, he was also among the most despised figures in the Third Reich. Yet top Nazi officials—perhaps even Hitler himself—dreaded cancer and protected Warburg in the hope he could cure it.

Using new archival sources and interviews with current cancer authorities, Sam Apple depicts a relentless figure, hungry for fame, who pursued his research even as the world around him disintegrated. Remarkably, Warburg’s theory about the metabolic origins of cancer has been revived in our own time, as scientists investigate the dangers of sugar and the link between obesity and cancer. Ravenous is a book for readers of Alan Turing and The Emperor of All Maladies: a tale of scientific discovery, personal peril and the race to end a disastrous disease.

"While millions of other Europeans with Jewish heritage were being rounded up and sent to their deaths, Otto Warburg enjoyed Nazi protection and a comfortable life in Berlin. Sam Apple, author of a new book, Ravenous, explores his remarkable tale of survival." — BBC History Revealed

"The research that Warburg is best known for today, and the work that forms the backbone of Ravenous, is his discovery that cancer cells behave differently from healthy cells in two very specific ways: They consume massive amounts of glucose — Apple compares them to ravenous shipwrecked sailors — and they eschew aerobic respiration in favor of fermentation... Apple covers everything from Hitler’s obsessive preoccupation with cancer to how the German Empire’s transformation into an industrial powerhouse led to a Romanticism-fueled movement that emphasized both environmental and racial purity. The fact that Apple can make these stories... feel so immediate is a testament to his canny knack for choosing apposite details." — Seth Mnookin, The New York Times

"Ravenous tells the story of an extraordinary life, and of the visionary work that sustained it... Apple has a gift for elegant analogies and illuminating similes… [An] exceptionally interesting and well-written book..." — Thomas Morris, Times Literary Supplement

"Eye-opening... filled with... outrageous and entertaining stories... I walked away from Ravenous thinking of Otto Warburg as a sort of Sigmund Freud of cancer research." — Sam Kean, The Wall Street Journal