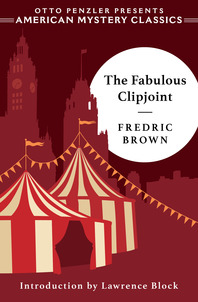 In Fredric Brown’s Edgar Award-winning debut, a teen is joined by his carny uncle to investigate his father’s death.

In the rough edges of 1940s Chicago, the discovery of a corpse in an alleyway isn’t always enough to cause a big stir—especially when the victim is killed in the midst of a night-long bender, caught between barrooms in what appears to be a mugging gone awry. Which is why the police don’t take a huge interest in finding the murderer of Wallace Hunter, a linotype operator who turns up dead after a solitary drinking adventure that led through many of the Loop’s less reputable establishments.

But for his teenage son, Ed, and his carny brother, Am, something about Wallace’s death feels fishy, a fact that grows increasingly bothersome when it becomes clear that some of the witnesses aren’t telling the whole story. In order to get to the heart of the matter, they’ll need all the skills Am picked up in the circus life—skills that young Ed will have to pick up on fast. And in the process of discovering the killer, they make another discovery as well: Wallace was a much different man than the father Ed thought he knew.

The Edgar Award-winning novel that announced a legendary voice in crime fiction, The Fabulous Clipjoint is the first in Fredric Brown’s long-running Ed & Am Hunter series. The book’s memorable mixture of a hardboiled mystery with an urban coming of age narrative remains fresh to this day.