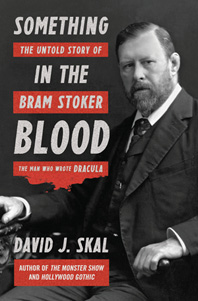 A ground-breaking biography revealing the haunted origins of the man who created Dracula.

Bram Stoker, despite having a name nearly as famous as Count Dracula, has remained an enigma. David J. Skal, in a psychological and cultural portrait, exhumes the inner world and strange genius of the writer who conjured an undying cultural icon. Stoker was inexplicably paralysed as a boy and his story unfolds against a backdrop of Victorian medical mysteries and horrors: fever, opium abuse, bloodletting, quack cures and the obsession with “bad blood” that inform every page of Dracula. Stoker’s ambiguous sexuality is explored through his acquaintance with Oscar Wilde, who emerges as Stoker’s repressed shadow self—a doppelgänger worthy of a Gothic novel. The psychosexual dimensions of Stoker’s correspondence with Walt Whitman, his punishing work ethic and his adoration of the actor Henry Irving are examined in scholarly detail.

“He [David Skal] is surely successful in his efforts to revivify his subject and to reveal that even those shadows we think we know may contain obscurities that move of their own volition and which, tantalizingly, remain just out of sight.” — The Times Literary Supplement

“...Skal's knowledge of the byways of literary and theatrical history is prodigious.” — The Sunday Times

“...Skal’s 'untold story' is an exercise in literary sleuthing, reading back from the fiction to uncover the motives of its making.” — Literary Review

“Bram Stoker, the author of Dracula. Most people don’t know much more about him than that, so this hefty biography is to be welcomed... [it] makes many fascinating connections.” — The Irish Times

“David Skal’s enormous, and enormously enjoyable, new biography of Stoker... is a vast and generously discursive work that has interesting and important things to say about almost every aspect of Stoker’s life and work...” — The Wildean