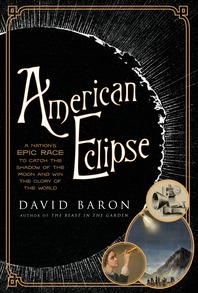 In the summer of 1878 three ruthless and brilliant scientists raced to Wyoming and Colorado to observe a total solar eclipse. One sought to discover a new planet. Another fought to prove that science was not an anathema to femininity. And a young, megalomaniacal inventor sought to test his bona fides and light the world through his revelations.

David Baron brings to life these three competitors—James Craig Watson, Maria Mitchell and Thomas Edison—re-creating the jockeying of nineteenth-century astronomy. With accounts of train robberies and Indian skirmishes, the last days of the Wild West come alive. A magnificent portrayal of America’s dawn as a superpower, American Eclipse depicts a nation looking to the skies to reveal its ambition and expose its genius.

"American Eclipse is an incredibly well written work of non-fiction. It is clearly the result of considerable research and careful thought. And it tells a great story." — Book of the Month, BBC Sky at Night

"... Eclipse is a shining example of scientific curiosity at work." — New Scientist

"The author gives a skillful account of the scientific aims of the various teams of eclipse-watchers, from the examination of the solar corona to the more precise calculation of the Moon’s orbit." — 12 Books of Christmas, Sky at Night