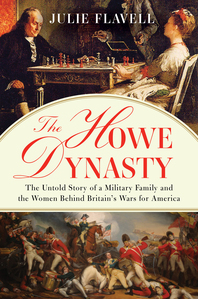 Finally revealing the family’s indefatigable women among its legendary military figures, The Howe Dynasty recasts the British side of the American Revolution.

In December 1774, Benjamin Franklin met Caroline Howe, the sister of British Admiral Richard and General William Howe, in a London drawing room for “half a dozen Games of Chess”. As Julie Flavell reveals, the games concealed a matter of the utmost diplomatic urgency, a last-ditch attempt to forestall the outbreak of war.

Aware that the Howes, both the men and the women, have seemed impenetrable to historians, Flavell investigated the letters of Caroline Howe, which have been overlooked for centuries. Using these revelatory documents, Flavell provides a compelling reinterpretation of England’s famous family across four wars, centring on their enigmatic roles in the American Revolution. The Howe Dynasty interweaves action-packed stories of North American military campaigns—including the Battles of Bunker Hill and Long Island—with parlour-room intrigues back in England, creating a riveting narrative that brings alive the influence of these extraordinary women in both peacetime and war.

"Spanning almost a century of the Georgian era, The Howe Dynasty presents a richly detailed and lively saga of one of its most distinguished families. Challenging and insightful, it reflects impressive scholarship, grounded in exhaustive archival research on both sides of the Atlantic... The Howe Dynasty shows how women whose supreme function in life was to produce male heirs could nonetheless find a voice through informal ‘networking,’ establishing crucial contacts in the drawing room or on the hunting field that could be mobilized to secure favors and control opinion." — Stephen Brumwell, What to Read this Week, The Wall Street Journal