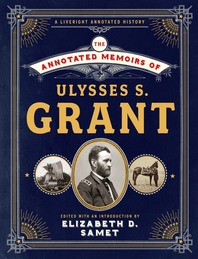 With kaleidoscopic insights, Elizabeth D. Samet has produced the most ambitious edition of Ulysses S. Grant's Memoirs yet.

Originally published in 1885 by Mark Twain, Ulysses S. Grant’s landmark memoir has been annotated by Elizabeth Samet in this lavish edition. No previous edition combines such a sweep of historical and cultural contexts with the literary authority that Samet, obsessed with Grant for decades, brings to the table.

Whether exploring novels Grant read at West Point or presenting majestic images culled from archives, Samet curates a richly annotated edition. Never has Grant’s transformation from tanner’s son to military leader been more insightfully and passionately explained than in this timely edition, appearing on the 150th anniversary of Grant’s 1868 presidential election.