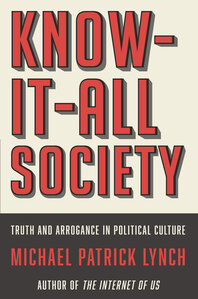 Taking stock of our fragmented political landscape, Michael Patrick Lynch delivers a trenchant philosophical take on digital culture and its tendency to make us into dogmatic know-it-alls. The internet—where most shared news stories are not even read by the person posting them—has contributed to the rampant spread of “intellectual arrogance.” In this culture, we have come to think that we have nothing to learn from one another; we are rewarded for emotional outrage over reflective thought; and we glorify a defensive rejection of those different from us.

Interweaving the works of classic philosophers such as Hannah Arendt and Bertrand Russell and imposing them on a cybernetic future they could not have possibly even imagined, Lynch delves deeply into three core ideas that explain how we’ve gotten to the way we are:

• our natural tendency to be overconfident in our knowledge;
• the tribal politics that feed off our tendency;
• and the way the outrage factory of social media spreads those politics of arrogance and blind conviction.

In addition to identifying an ascendant “know-it-all-ism” in our culture, Lynch offers practical solutions for how we might start reversing this dangerous trend—from rejecting the banality of emoticons that rarely reveal insight to embracing the tenets of Socrates, who exemplified the humility of admitting how little we often know about the world, to the importance of dialogue if we want to know more. With bracing and deeply original analysis, Lynch holds a mirror up to American culture to reveal that the sources of our fragmentation start with our attitudes toward truth. Ultimately, Know-It-All Society makes a powerful new argument for the indispensable value of truth and humility in democracy.

"The book is accessible, admirably concise, clearly written, and richly insightful, both as a cultural diagnosis and as an exemplar of applying philosophical inquiry—ancient or otherwise—to everyday problems." — Chad Comello, Booklist

"This book is both a treasure and a treat—that rare volume that is philosophically rich, politically relevant, and lyrically written." — Eboo Patel, author of Out of Many Faiths

"A sharp and engaging critique of the tribal arrogance that’s so common in contemporary life, by one of our leading public philosophers. Lynch has a lot of provocative ideas—about social media, the rise of Donald Trump, whether we have to listen to neo-Nazis, and much else—and his rich book is a delight to engage with." — Paul Bloom, Professor of Psychology, Yale University, and author of Against Empathy: The Case for Rational Compassion

"Michael Lynch has done it. Finally, someone has answered the question that has exasperated so many in this ‘post-truth’ era: Why are some people unconvinced by facts? The answer lies not in irrationality but identity. In these polarized times, to question someone’s beliefs is to question their sense of self. In this book, Lynch brilliantly demonstrates that a solution to the problem of belief lies not just in valuing truth and evidence but reforming some of the toxic mental attitudes that exist not just in others but ourselves." — Lee McIntyre, author of The Scientific Attitude

"A timely book on an important topic in our political culture today. Lynch is just the person to bring philosophical insight to these challenges—of trust, expertise, disagreement, and the prospects for conversation across the deep political chasms of our day." — Sanford Goldberg, author of To the Best of Our Knowledge

"If we have learned anything over these past few years, it is that democracy is difficult. In this essential book for our times, Michael Lynch unflinchingly lays out its central conundrums in painfully recognizable ways, and bravely offers hope, and perhaps, some ways out. A remarkable achievement." — Jason Stanley, author of How Fascism Works

"Michael Patrick Lynch’s book uses the classics of philosophy to examine why our society, in a modern age of technology and education, is increasingly centered around a dysfunctional, narcissistic rejection of objectivity and reason. Know-It-All Society challenges us to consider why we arrogantly refuse to listen to each other, no matter what our politics or our beliefs." — Tom Nichols, author of The Death of Expertise

"Professor Lynch not only diagnoses the reasons for our current predicament but also suggests ways in which we can begin to challenge our tribal arrogance. Know-It-All Society is an important (and wonderfully readable) book." — David Edmonds, host of BBC’s The Big Idea