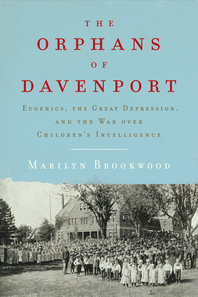 The fascinating—and eerily timely—tale of the forgotten Depression-era psychologists who overthrew long-accepted racist and classist views of childhood development.

“Doomed from birth” was how psychologist Harold Skeels described two toddler girls at the Orphans’ Home in Davenport, Iowa, in 1934. Following prevailing eugenic beliefs, Skeels and his colleague Marie Skodak assumed that the girls had inherited their parents’ low intelligence and sent them to an institution for the “feebleminded” to be cared for by “moron” women. To their astonishment, under the women’s care, the children’s IQ scores became normal. This revolutionary finding, replicated in eleven more “retarded” children, infuriated leading psychologists, all eugenicists unwilling to accept that nature and nurture work together to decide our fates. Recasting Skeels and his team as intrepid heroes, Marilyn Brookwood weaves years of prodigious archival research to show how after decades of backlash, the Iowans finally prevailed. In a dangerous time of revived white supremacy, The Orphans of Davenport is an essential account, confirmed today by neuroscience, of the power of the Iowans’ scientific vision.