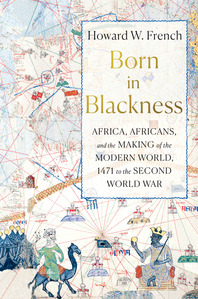 Built on the bodies of slaves: how Africa was erased from the history of the modern world

Long Read in The Guardian by Howard W. Marks

Revealing the central yet intentionally obliterated role of Africa in the creation of modernity, Born in Blackness vitally reframes our understanding of world history.

In a sweeping narrative that traverses 600 years, one that eloquently weaves precise historical detail with poignant personal reportage, Pulitzer Prize finalist Howard W. French retells the story of medieval and emerging Africa, demonstrating how the economic ascendancy of Europe, the anchoring of democracy in America and the fulfillment of so-called Enlightenment ideals all grew out of Europe’s dehumanising engagement with the “darkest” continent.

Born in Blackness dramatically retrieves the lives of major African historical figures whose stories have been repeatedly etiolated and erased over centuries, from unimaginably rich medieval African emperors who traded with Asia; to Kongo sovereigns who heroically battled seventeenth-century European powers; to ex-slaves who liberated Haitians from bondage. In doing so, French tells the story of gold, tobacco, sugar and cotton—and the greatest “commodity” of all, the millions of people brought in chains from Africa to the New World, whose reclaimed histories fundamentally help explain our present world.

"Born in Blackness is enlivened with personal anecdotes… I found the book to be searing, humbling and essential reading." — Nigel Cliff, The New York Times

"There are few words that can express the resounding impact of French’s breathtaking work on the known historiography of African and African American history . . . Highly recommended for any audience." — Monique Martinez, Library Journal

"The way we think about history is entirely wrong, says Howard W French at the start of this magnificent, powerful and absorbing book... This is not a comfortable or comforting read, but it is beautifully done; a masterpiece even... French writes with the elegance you would expect from a distinguished foreign correspondent, and with the passion of someone deeply committed to providing a corrective." — Peter Frankopan, The Observer

"A recasting of the history of the modern world that places Africa and Africans at the centre of the story. French argues that the rise of the west to global dominance was made possible by the exploration and exploitation of Africa—and, above all, by the slave trade. He recounts the destruction of complex African societies and the scale and brutality of slavery. At the time of Black Lives Matter this is an intensely political message. But French’s book is no work of propaganda and has been hailed as a “masterpiece” by Peter Frankopan, professor of global history at Oxford." — Financial Times

"A very personal book—written with a steely and elegant indignation—it is also an impressively detailed historical account of the role of Africa and Africans in the development of Europe and the Americas... If the strength of Mr. French’s book lies in its quiet but adamant righteousness, it rests also in its empirical force.... It is his view—with which few would rush to argue after reading Born in Blackness—that the sooner the ‘denial’ about the role slaves played in creating America’s prosperity is put to rest, the better Americans as a people will come to understand ‘their country’s true place in world history.’" — Tunku Varadarajan, Wall Street Journal

"Born in Blackness is an extraordinary book that draws deep on [French’s] decades of experience as he seeks to explain the circumstances of Africa’s history with Europeans who were first attracted to the continent in the search of gold and slaves... French’s narrative is a bold retelling of what has often been told, but with additional details that might have escaped the attention of many historians… In many surprising ways, [Born in Blackness] provides a brilliantly argued case for recognition of Africa’s immense contribution to modernity." — Stephen Williams, African Business