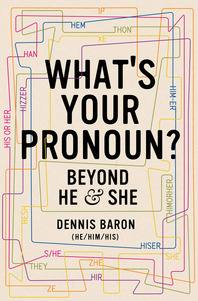 Contextualising one of the most pressing cultural questions of our generation, Dennis Baron reveals the untold story of how we got from he and she to zie and hir and singular they.

Like trigger warnings and gender-neutral bathrooms, pronouns spark debate, prompting new policies about what pronouns to use. More than a by-product of the culture wars, gender-neutral pronouns are, however, nothing new. Pioneering linguist Dennis Baron puts them in historical context, noting that Shakespeare used singular they, women invoked the generic use of he to assert the right to vote (while those opposed to women’s rights asserted that he did not include she) and people have been coining new gender pronouns for centuries. An essential work in understanding how 21st century culture has evolved, What’s Your Pronoun? chronicles the story of the role pronouns have played—and continue to play—in establishing both our rights and our identities.

“Dennis Baron’s What’s Your Pronoun? is a delightful account of the search for what Baron, a professor of English and linguistics at the University of Illinois, calls ‘the missing word’: a third person singular, gender-neutral pronoun.” — Amia Srinivasan, London Review of Books

“Dennis Baron has spent years researching the quest for a gender-neutral third-person singular pronoun in English. Lively, accessible and full of fascinating details, What’s Your Pronoun? will appeal to anyone with an interest in linguistic and cultural history.” — Deborah Cameron, Worcester College, University of Oxford

“Into the breach comes a useful corrective in the form of Dennis Baron's well-timed new book, "What's Your Pronoun?"” — The Economist

“A scrupulous and absorbing survey. Its great virtue is to show that these issues are nothing new… This scholarly assiduousness, though, also makes him the ideal pilot through these contentious political-linguistic waters. If you want to know why more people are asking ‘what’s your pronoun?’ then you (singular or plural) should read this book.” — Joe Moran, The New York Times Book Review

“In this learned and entertaining book, Dennis Baron provides vital historical context to today's impassioned debates over gender-neutral and non-binary pronouns... Baron knows what he's talking about and provides a much-needed dose of scholarship leavened with good sense in the language wars. The book is timely, for pronouns are suddenly politically sexy.” — The Times

“His [Dennis Baron's] new book, What's Your Pronoun? Beyond He and She is a meticulous, consummate dissection of the pronoun wars...” — Attitude