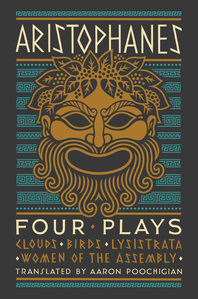 A “zany [and] inventive” (Emily Wilson) translation that for the first time captures both the antic outrageousness and lyrical brilliance of antiquity’s greatest comedies.

Aristophanes’s satirical masterpieces, immensely popular with the Athenian public, were frequently crude, even obscene. His plays revealed to his contemporaries, and now teach us today, that when those in power act obscenely, patriotic obscenity is a fitting response. Until now English translations have failed to capture Aristophanes’s poetic genius. Aaron Poochigian, the first poet-classicist to tackle these plays in a generation, offers “effortlessly readable and genuinely theatrical” (Simon Armitage) versions of four of Aristophanes’s most entertaining, provocative and lyrically ingenious comedies, finally giving twenty-first-century readers a sense of the subversive pleasure audiences felt when these works were first performed on the Athenian stage.

"Aristophanes was a funny, often obscene, social commentator, and he was also a brilliantly fluent, wide-ranging poet, whose lyric rhythms were recited and sung to music, with dancing. It’s very rare for modern translators to convey his poetic virtuosity or make any attempt to bring his meters to life. But Aaron Poochigan has achieved this feat, crafting polymetric translations that convey the whole range of Aristophanes’s larger-than-life characters and provocative, alternative reality scenarios. This new Aristophanes is zany, sharp, inventive, vivacious, and surprisingly relevant for our times." — Emily Wilson, translator of Homer’s Odyssey

"Poochigian has reanimated this quartet of Greek dramas with an approach that conveys all the comic energies, political urgencies, and philosophical concerns of the original plays. Alive and alert to the evolutions and mutations of contemporary language but tuned to the pitch and rhythms of ancient literature, these energetic and adroit twenty-first century translations are both effortlessly readable and genuinely theatrical—as lively on the page as they will be on any stage." — Simon Armitage, Poet Laureate of the United Kingdom

"Luckily for us, Aaron Poochigian has re-animated Aristophanes, in glittering translations of four of his most 21st-century-appropriate plays. It will be interesting to see whether directors bring these versions to life." — Willard Spiegelman, The Wall Street Journal